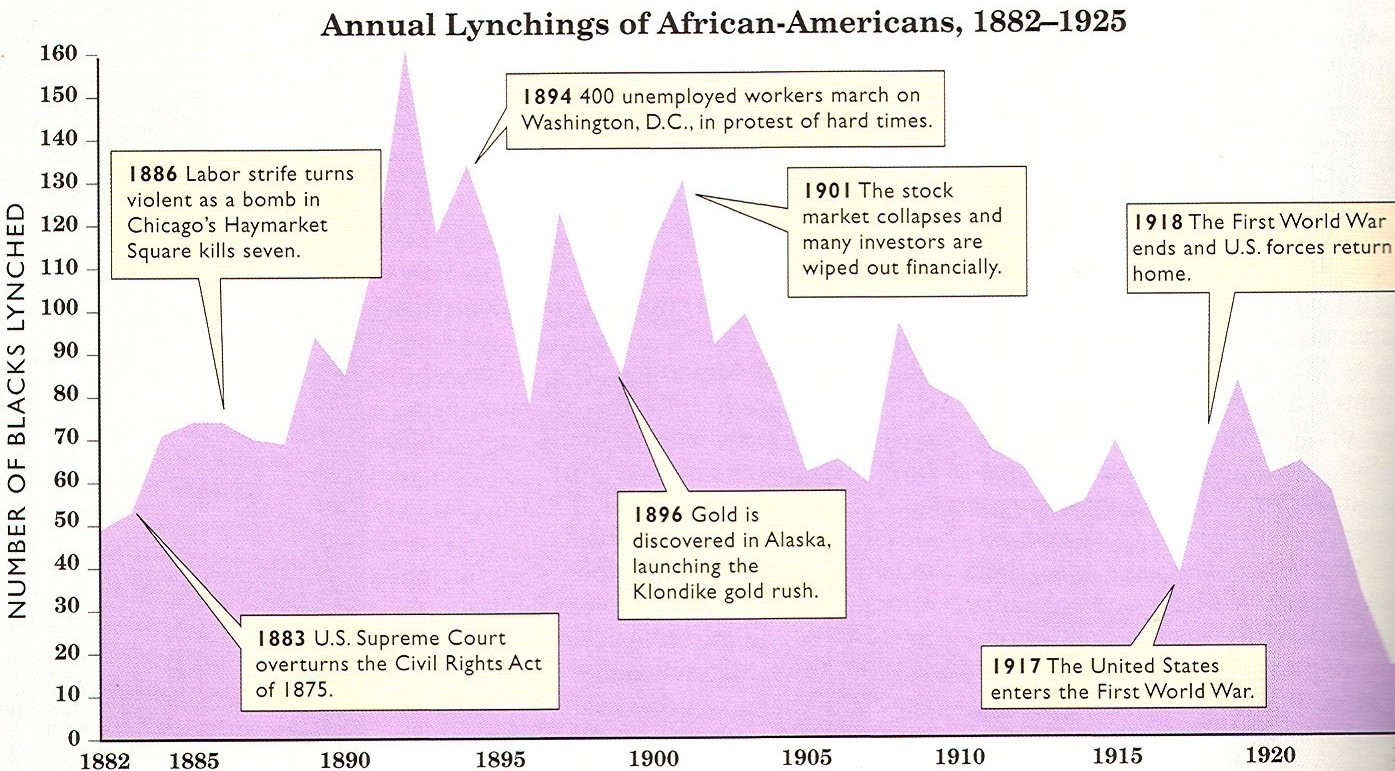 Little is known about Reverend D. A. Graham, the A.M.E. minister who delivered the speech that appears below.  However the minister’s words were recorded as part of a nationwide protest in 1899 against lynchings of African Americans across the nation.  In May of 1899 the newly formed African American Council issued a proclamation calling upon black Americans to set apart Friday, June 2, “as a day of fasting and prayer.” Special exercises were to be held in black churches across the nation the following Sunday, as a protest against lynching.  On June 4, Reverend Graham delivered his sermon at Bethel A.M.E. Church in Indianapolis as part of the protest.  The sermon, reprinted in the Indianapolis Recorder, a local African American newspaper, appears below.

The American Negro is afflicted, and the cause of his affliction is a most unreasonable and silly prejudice in the white Americans. If the hatred were reversed it would seem more reasonable, since the Caucasian has suffered nothing from the Negro, while the latter has suffered everything at the hands of the Caucasian.

While this prejudice is greatest in the South, it also manifests itself greatly to the affliction of the colored man in the North. When he wants to buy property or rent a house he is often turned away because of his color. When he seeks employment where help is advertised for, he is told that “Negroes need not apply.” Our girls cannot get employment in shops, stores or factories, no matter how well educated, refined and good looking.  Naturally, this causes many to fall into evil ways and makes dishonest men of youth who with a man’s chance would have become honorable and industrious citizens.

When we cross Mason and Dixon’s line the evil shows itself at every turn. Separate waiting rooms, separate ticket windows, separate cars, nothing to eat at any lunch counter. Refused admission to churches, cemeteries and even parks. Parks and cemeteries are placarded “Negroes and dogs not admitted.” The effect of such proscription is most baneful as well as inconvenient.

How can the colored youth ever learn to look upon himself as a man when he is constantly treated as a brute? This is one of the greatest causes of vice and drunkenness among the Negroes. To the Southern whites the manly, refined Negro is the most despicable because “he tries to act white,” while the ignorant, servile fellow who dances jigs and acts the monkey on the street is the “good old darkey of antebellum days.”

The disfranchisement of the Negroes in the South is not the worst evil. If they would require an educational qualification for all voters, we would see no evil in it whatever.

The greatest affliction we have to suffer is the lack of trial by jury when accused of crime. Lynching of Negroes is growing to be a Southern pastime. When reproved for their barbarity they say, “The only way to stop lynching is to stop the crime which leads to lynching.” Many Northern people are influenced by this cry and talk about lynching as if it were always for crimes against women. Even some colored people up here have fallen into this error. You will pardon me, therefore, while I give you some plain facts to set you right about this. Since January 1, 1892, 1,226 people have been lynched in this country, principally Negroes. Not one third of these persons were accused of assaulting women.

In 1892, out of 241 lynched, only 46 had such charge against them. In 1893, out of 159 lynched, 39 were so charged. Last year, out of 131 lynched, 24 were charged either with assault or attempted assault. In the face of these figures who can say that we can stop lynching by stopping one crime? The very next day after Sam Hose was roasted and his charred remains divided among the white savages of Georgia for souvenirs,’ a Negro, Willis Sees, at Osceola, Arkansas, was hung on suspicion of barn burning. In 1894, 10 were lynched for barn burning. Three women were lynched the same year in three different states. Again, I beg you to consider carefully these charges of assault. How many of them are guilty? What is the proof against them? One year ago yesterday in the town of Dorcyville, Louisiana, a man named Will Steak was burned alive upon the charge of assault of one Mrs. Parrish. The Times Democrat of New Orleans in its account of the affair said: “Mrs. Parrish identified the Negro almost positively.” He died protesting his innocence, but because he was almost identified he was burned alive.

William Offet, of Elyria, Ohio, was fortunate because he was in a Northern state. Being identified by Mrs. J. C. Underwood, the wife of a minister, he was sent to the penitentiary for fifteen years. When he had been in prison four years, this “respectable white lady,” conscience smitten, confessed to her husband that she was equally guilty with the Negro. The husband had the prisoner pardoned, and secured a divorce from his depraved wife.

There are many such cases. Ed Coy, who was burned at Texarkana, Arkansas, was another instance exactly similar to that of Offet, and Judge Tourgee obtained the proof that the relatives and husband of the woman who made the charge were fully cognizant of the fact that she was equally guilty with Coy. They compelled her to make the charge and then to set fire to her paramour.

Again, white men often black themselves and commit crime, then lead a mob to lynch some Negro who may happen to be in the neighborhood. In Atlanta, Georgia, about four years ago a black man was discovered in the room of a young white girl of high standing. While attempting to escape he was shot and captured. The black man was found to be the son of a prominent white neighbor with his face and hands blacked. Had he not been captured some poor Negro would have been seized, identified “almost positively” and hung to the nearest tree. A similar case happened in Tennessee a few years ago.

Many innocent men are thus hanged or burned alive just because American prejudice refuses them a trial by their peers. And some court trials are little better than mob trials. The present governor of Georgia, Mr. Candler, while district judge three years ago, sent Ed Aikin, a boy of nineteen years, to the chain gang for ten years on the charge of attempted assault. The only evidence the girl offered against him was that she met him coming down a path and as he did not get out of the path she was afraid and ran. She swore that he was not within ten feet of her, did not speak to her, and did not follow her, but she would make an example of him so that young darkies would get out of the path when they saw white girls coming. Thereupon he sentenced him to ten years in the chain gang. This is an example of attempted assault.

Now, we want it distinctly understood that we are not trying to excuse crime. We contend that the death penalty should be inflicted upon every man who assaults a woman, without regard to the color of the victim or the criminal. This is more than the whites ask or will allow. In fact, there are twenty colored women assaulted by white men for every white woman assaulted by Negroes. Such cases are countless in every community in the South, but there is no redress for the colored women, either by law or by custom. Colored women are absolutely at the mercy of white men in the South, and a man does not lose social prestige or church relationship for ruining colored girls. I compelled a white Southern minister to acknowledge this fact before the ministers’ meeting of Minneapolis a few years ago. And yet they talk about the immorality of the Negroes!

Under all these afflictions we have a great work to perform. We must not allow the injustice and cruelty of the whites to divert our attention from our own weaknesses and shortcomings. More attention must be given to the cultivation of Christian character. The morals of the race must be improved. Our women must spend more time in mothers’ meetings and clubs for intellectual and moral culture and less on parties, receptions and balls. More money should be spent for good literature and in support of Christian Endeavor, Y.M.C.A., and kindred organizations instead of on Sunday excursions and theaters. If American justice and Christianity have decreed that we must lift ourselves by our own bootstraps let us set ourselves heroically to the task. Measured by the depth from which we have come, we have much to encourage us; casting our eyes to the summits yet to be gained, let us thank God and press on.