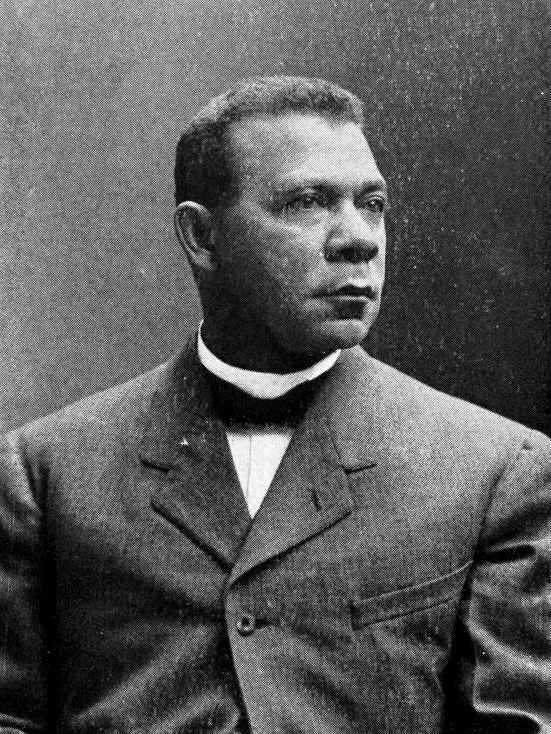 One year after his Atlanta Compromise Speech 40-year-old Booker T. Washington was on his way to becoming the most influential African American in the United States.  One example of that growing influence was the invitation from the Harvard Alumni to speak at their annual dinner in Cambridge, Massachusetts while he was on a national lecture tour.  Washington’s brief address appears below.

It would in some measure relieve my embarrassment if I could, even in a slight degree, feel myself worthy of the great honor which you do me to-day. Why you have called me from the Black Belt of the South, from among my humble people, to share in the honors of this occasion, is not for me to explain; and yet it may not be inappropriate for me to suggest that it seems to me that one of the most vital questions that touch our American life, is how to bring the strong, wealthy and learned into helpful touch with the poorest, most ignorant, and humble and at the same time, make the one appreciate the vitalizing, strengthening influence of the other. How shall we make the mansions on yon Beacon street feel and see the need of the spirits in the lowliest cabin in Alabama cotton fields or Louisiana sugar bottoms? This problem Harvard University is solving, not by bringing itself down, but by bringing the masses up.

If through me, an humble representative, seven millions of my people in the South might be permitted to send a message to Harvard–Harvard that offered up on death’s altar, young Shaw, and Russell, and Lowell and scores of others, that we might have a free and united country, that message would be, “Tell them that the sacrifice was not in vain. Tell them that by the way of the shop, the field, the skilled hand, habits of thrift and economy, by way of industrial school and college, we are coming. We are crawling up, working up, yea, bursting up. Often through oppression, unjust discrimination and prejudice, but through them all we are coming up, and with proper habits, intelligence and property, there is no power on earth that can permanently stay our progress.”

This country demands that every race measure itself by the American standard. By it a race must rise or fall, succeed or fail, and in the last analysis mere sentiment counts for little.

If my life in the past has meant anything in the lifting up of my people and the bringing about of better relations between your race and mine. I assure you from this day it will mean doubly more. In the economy of God there is but one standard by which an individual can succeed–there is but one for a race. This country demands that every race measure itself by the American standard. By it a race must rise or fall, succeed or fail, and in the last analysis mere sentiment counts for little. During the next half century and more, my race must continue passing through the severe American crucible. We are to be tested in our patience, our forbearance, our perseverance, our power to endure wrong, to withstand temptations, to economize, to acquire and use skill; our ability to compete, to succeed in commerce, to disregard the superficial for the real, the appearance for the substance, to be great and yet small, learned and yet simple, high and yet the servant of all. This, this is the passport to all that is best in the life of our republic, and the Negro must possess it, or be debarred.

While we are thus being tested, I beg of you to remember that wherever our life touches yours, we help or hinder. Wherever your life touches ours, you make us stronger or weaker. No member of your race in any part of our country can harm the meanest member of mine, without the proudest and bluest blood in Massachusetts being degraded. When Mississippi commits crime, New England commits crime, and in so much, lowers the standard of your civilization. There is no escape–man drags man down, or man lifts man up.

In working out our destiny, while the main burden and center of activity must be with us, we shall need, in a large measure in the years that are to come, as we have in the past, the help, the encouragement, the guidance that the strong can give the weak. Thus helped, we of both races in the South, soon shall throw off the shackles of racial and sectional prejudice and rise, as Harvard University has risen and as we all should rise, above the clouds of ignorance, narrowness and selfishness, into that atmosphere, that pure sunshine, where it will be our highest ambition to serve MAN, our brother, regardless of race or previous condition.