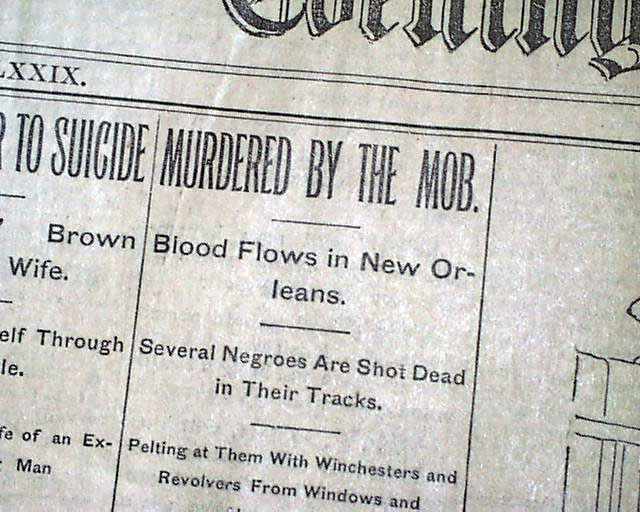 The 1895 New Orleans Dockworkers Riot was a racially motivated attack on non-union black dockworkers by white dockworkers and their sympathizers.  The riot occurred in New Orleans, Louisiana from March 9 through 12, 1895 and marked the end of nearly 15 years of bi-racial union cooperation and union power in New Orleans.  The riot also left six black laborers dead and many other wounded.

Following the economic panic of 1893 and the onset of a national depression, New Orleans commerce suffered tremendously from diminished trade, low cotton prices, smaller crops, and a decline in profits.  Economic concerns intensified racial tensions and black dockworkers as white dockworkers began to discuss withdrawing from the equal share agreement.

In December, 1894, the original 50/50 compromise was re-instated.  But racial antagonisms remained as white unions, attempting to maintain their racially dominant position, did not give black dockworkers an equal number of jobs.  And black workers, fearful of racial violence and unemployment, and encouraged by Booker T. Washington to abandon their interests in unions and strikes, became increasingly disillusioned.  Many of them were now willing to work non-unions jobs both on and away from the docks that paid far less.  As a result, an all-black, low-wage enclave developed that competed in a “race to the bottom” bidding war in wages with white unions.