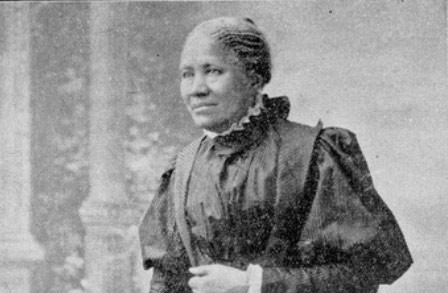 On May 20, 1893, women’s activist Frances Ellen Watkins Harper gave this speech before the World’s Congress of Representative Women, meeting in their conference in Chicago, Illinois.

If before sin had cast its deepest shadows or sorrow had distilled its bitterest tears, it was true that it was not good for man to be alone, it is no less true, since the shadows have deepened and life’s sorrows have increased, that the world has need of all the spiritual aid that woman can give for the social advancement and moral development of the human race. The tendency of the present age, with its restlessness, religious upheavals, failures, blunders, and crimes, is toward broader freedom, an increase of knowledge, the emancipation of thought, and a recognition of the brotherhood of man; in this movement woman, as the companion of man, must be a sharer. So close is the bond between man and woman that you cannot raise one without lifting the other. The world cannot move without woman’s sharing in the movement, and to help give a right impetus to that movement is woman’s highest privilege.

If the fifteenth century discovered America to the Old World, the nineteenth is discovering woman to herself. Little did Columbus imagine, when the New World broke upon his vision like a lovely gem in the coronet of the universe, the glorious possibilities of a land where the sun should be our engraver, the winged lightning our messenger, and steam our beast of burden. But as mind is more than matter, and the highest ideal always the true real, so to woman comes the opportunity to strive for richer and grander discoveries than ever gladdened the eye of the Genoese mariner.

Not the opportunity of discovering new worlds, but that of filling this old world with fairer and higher aims than the greed of gold and the lust of power, is hers. Through weary, wasting years men have destroyed, dashed in pieces, and overthrown, but today we stand on the threshold of woman’s era, and woman’s work is grandly constructive. In her hand are possibilities whose use or abuse must tell upon the political life of the nation, and send their influence for good or evil across the track of unborn ages.

As the saffron tints and crimson flushes of morn herald the coming day, so the social and political advancement which woman has already gained bears the promise of the rising of the full-orbed sun of emancipation. The result will be not to make home less happy, but society more holy; yet I do not think the mere extension of the ballot a panacea for all the ills of our national life. What we need today is not simply more voters, but better voters. Today there are red-handed men in our republic, who walk unwhipped of justice, who richly deserve to exchange the ballot of the freeman for the wristlets of the felon; brutal and cowardly men, who torture, burn, and lynch their fellow-men, men whose defenselessness should be their best defense and their weakness an ensign of protection. More than the changing of institutions we need the development of a national conscience, and the upbuilding of national character. Men may boast of the aristocracy of blood, may glory in the aristocracy of talent, and be proud of the aristocracy of wealth, but there is one aristocracy which must ever outrank them all, and that is the aristocracy of character; and it is the women of a country who help to mold its character, and to influence if not determine its destiny; and in the political future of our nation woman will not have done what she could if she does not endeavor to have our republic stand foremost among the nations of the earth, wearing sobriety as a crown and righteousness as a garment and a girdle. In coming into her political estate woman will find a mass of illiteracy to be dispelled. If knowledge is power, ignorance is also power. The power that educates wickedness may manipulate and dash against the pillars of any state when they are undermined and honeycombed by injustice.

I envy neither the heart nor the head of any legislator who has been born to an inheritance of privileges, who has behind him ages of education, dominion, civilization, and Christianity, if he stands opposed to the passage of a national education bill, whose purpose is to secure education to the children of those who were born under the shadow of institutions which made it a crime to read.

Today women hold in their hands influence and opportunity, and with these they have already opened doors which have been closed to others. By opening doors of labor woman has become a rival claimant for at least some of the wealth monopolized by her stronger brother. In the home she is the priestess, in society the queen, in literature she is a power, in legislative halls law-makers have responded to her appeals, and for her sake have humanized and liberalized their laws. The press has felt the impress of her hand. In the pews of the church she constitutes the majority; the pulpit has welcomed her, and in the school, she has the blessed privilege of teaching children and youth. To her is apparently coming the added responsibility of political power; and what she now possesses should only be the means of preparing her to use the coming power for the glory of God and the good of mankind; for power without righteousness is one of the most dangerous forces in the world.

Political life in our country has plowed in muddy channels, and needs the infusion of clearer and cleaner waters. I am not sure that women are naturally so much better than men that they will clear the stream by the virtue of their womanhood; it is not through sex but through character that the best influence of women upon the life of the nation must be exerted.

I do not believe in unrestricted and universal suffrage for either men or women. I believe in moral and educational tests. I do not believe that the most ignorant and brutal man is better prepared to add value to the strength and durability of the government than the most cultured, upright, and intelligent woman. I do not think that willful ignorance should swamp earnest intelligence at the ballot-box, nor that educated wickedness, violence, and fraud should cancel the votes of honest men. The unsteady hands of a drunkard cannot cast the ballot of a freeman. The hands of lynchers are too red with blood to determine the political character of the government for even four short years. The ballot in the hands of woman means power added to influence. How well she will use that power I cannot foretell. Great evils stare us in the face that need to be throttled by the combined power of an upright manhood and an enlightened womanhood; and I know that no nation can gain its full measure of enlightenment and happiness if one-half of it is free and the other half is fettered. China compressed the feet of her women and thereby retarded the steps of her men. The elements of a nation’s weakness must ever be found at the hearthstone.

More than the increase of wealth, the power of armies, and the strength of fleets is the need of good homes, of good fathers, and good mothers.

The life of a Roman citizen was in danger in ancient Palestine, and men had bound themselves with a vow that they would eat nothing until they had killed the Apostle Paul. Pagan Rome threw around that imperiled life a bulwark of living clay consisting of four hundred and seventy human hearts, and Paul was saved. Surely the life of the humblest American citizen should be as well protected in America as that of a Roman citizen was in heathen Rome. A wrong done to the weak should be an insult to the strong. Woman coming into her kingdom will find enthroned three great evils, for whose overthrow she should be as strong in a love of justice and humanity as the warrior is in his might. She will find intemperance sending its flood of shame, and death, and sorrow to the homes of men, a fretting leprosy in our politics, and a blighting curse in our social life; the social evil sending to our streets women whose laughter is sadder than their tears, who slide from the paths of sin and shame to the friendly shelter of the grave; and lawlessness enacting in our republic deeds over which angels might weep, if heaven knows sympathy.

How can any woman send petitions to Russia against the horrors of Siberian prisons if, ages after the Inquisition has ceased to devise its tortures, she has not done all she could by influence, tongue, and pen to keep men from making bonfires of the bodies of real or supposed criminals?

O women of America! into your hands God has pressed one of the sublimest opportunities that ever came into the hands of the women of any race or people. It is yours to create a healthy public sentiment; to demand justice, simple justice, as the right of every race; to brand with everlasting infamy the lawless and brutal cowardice that lynches, burns, and tortures your own countrymen.

To grapple with the evils which threaten to undermine the strength of the nation and to lay magazines of powder under the cribs of future generations is no child’s play.

Let the hearts of the women of the world respond to the song of the herald angels of peace on earth and good will to men. Let them throb as one heart unified by the grand and holy purpose of uplifting the human race, and humanity will breathe freer, and the world grow brighter. With such a purpose Eden would spring up in our path, and Paradise be around our way.