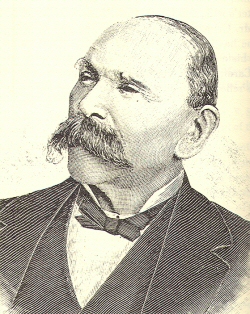 Between 1879 and 1880, six thousand Exodusters left Louisiana and Mississippi for Kansas. Their migration, prompted by the end of racially-integrated Reconstruction governments, by anti-black violence and by sharecropping and tenant farming, brought national attention including a Congressional hearing, and generated a national debate about whether African Americans should migrate from the South to improve their political and economic prospects or remain in the region and continue to demand their rights. Frederick Douglass, the nation’s most prominent African American leader argued against migration because “it leaves the whole question of equal rights on the soil of the South open and still to be settled. ” Continued migration “would make freedom and free institutions depend upon migration rather than protection. “

Robert J. Harlan joined Richard T. Greener and other black leaders in opposing Douglass. In a speech on May 8, 1879 he argued that migration was not only a way to escape oppression, it was also a powerful protest against those who would deny African Americans their freedom. Harlan’s speech appears below.

Mr. President, as to the present migration movement of the colored people, let it be understood that we have the lawful right to stay or to go wherever we please. The southern country is ours. Our ancestors settled it, and from the wilderness formed the cultivated plantation, and they and we have cleared, improved, and beautified the land.

Whatever there is of wealth, of plenty, of greatness, and of glory in the South, the colored man has been, and is, the most important factor. The sweat of his brow, his laborer’s toil, his patient endurance under the heat of the semi tropical sun and the chilling blasts of winter, never deterred the laborer from his work.

The blood of the colored man has fertilized the land and has cemented the Union. Aware of these facts, we should be baser than the willing slaves did we consent to the dictation of any men or body of men as to where we may go, when we shall go, or how long we shall stay.

The Republic owes to every citizen protection for his home and security for his rights. Let this security be given, and until that be done, let us cry aloud against those who refuse it, whether in the North or in the South. Let us remember all such in our prayers to the God of Liberty and of justice, that He may punish them as they deserve. Let us remember them at the ballot box, and fail not to inflict the retribution which they so justly deserve, and if we be obstructed in casting our votes, we can go where there will be no hindrance, and where we can vote as we please.

He who submits in silence to an injury may be avenged by a righteous heaven, but has little hope from man. Let us, therefore, keep the wrongs under which we labor before the public until an awakened sense of right and justice on both sides of Mason and Dixon’s line shall work out a remedy. They need not tell us that there is no way to right our wrongs. The trouble is not in the want of a way; it is the want of a will. Let us exert the will and the way will be found. But this may take time, and while time runs many of us may perish. If the Government shall fail to give protection to our people, it can do no less than aid those who wish to change their habitations to safer and better homes.

With these views before us, and believing in an all wise Providence, we would be recreant to our principles, to our creed, to our race, and to our God should we neglect to use all the means in our power to bring about the desired results.

Such a measure would have a double effect; it would arouse the attention and self interest of the North that the laws should be sternly enforced that regulate the purity of the ballot and security for the persons of the colored race, and it would strongly appeal to the interest and humanity of the Southern people to see that they should not lose an industrious and worthy population by reason of lawlessness and inhumanity. Let us, therefore, insist on some such measure as an alternative right.

Let us demand that the principles we assert be declared essential, in resolutions of legislatures and conventions, and made a part of our party platform.

Let us agitate, even as other classes agitate when their rights and wishes are disregarded.

We are Americans, and let us act as Americans have ever done when denied their rights. Cry aloud and spare not until our injuries are known and our wrongs are redressed and our demands are granted.

Let us frame an address and make an appeal to Congress for relief. Although the Democrats are in a majority, no matter. Some Democrats have a sense of justice, and others assume the virtue if they have it not; let us put them to the test. Let our motto be “Protection to our homes or homes elsewhere,” and until the Government can be brought to aid migration, let private kindliness and enterprise be brought into action. Let us appeal to the people of the North, to corporations and to common carriers for aid, so that all who are oppressed in the land of their birth may find freedom in the land of their adoption. If the leading men of the South will make another Egypt of these bright and sunny valleys, then must the oppressed go forth into the promised land of liberty, into the Western States and Territories, where the people are at peace and the soil is free, and where every man can secure a home for himself and family with none to molest him or make him afraid.

Already many have seen the beacon light of hope and are making their way toward it, and if the oppression is continued more and more will burst their chains and take the road to liberty.

There are some signs of objection to this on the part of the land owners. They want the colored man to stay and till the soil. Very well; then let them treat him justly and fairly and protect him from criminal lawlessness. If they cannot or will not do this, they have no more right to ask him to stay, as they have no legal right to forbid him to go, and any attempt to restrain this movement will be vain and futile.

It is not a flight of fugitive slaves, but a voluntary movement of freemen, seeking liberty and security. It is the exercise of the right of any American to better his condition by going from one part of the country to another, just as interest or fancy may lead him. If we cannot do this, we are not free, no more than are the serfs of Russia, who, until lately, were a part of the estate and sold as such, but, if we are to be re enslaved we may as well die on the road to liberty as at the feet of tyrants. We may as well expire contending for liberty, aye, and far better, than in base submission to degrading slavery.

At present there seems to be no alternative.

The reaction has robbed Southern Republicans, both white and colored, of their votes and of their voices, and this has thrown the nation into the hands of our opponents, who are determined to strip us of the last measure of protection.

Our political rights in these States are wholly suspended or abrogated. We have nothing but the mockery of legal proceedings, and Attorney General Devens, the constitutional adviser of the President, informs us that there is no prospect of justice from Southern tribunals for the colored man. Possibly he did not intend to convey that impression, but if not, what does he mean? You may study his long and carefully prepared paragraphs without coming to any other conclusion than this, that at present there is no hope for justice to the colored man from Southern courts.

If, then, all stay, all must submit. If some go they will be free, and possibly, by their going, they will awake the ruling minds of the South to a sense of the necessity of what is right.

For these reasons, therefore, I am an advocate for migration as the only present practicable remedy for our wrongs, and I am for the exercise of that remedy in a large measure and at all hazards.

BlackPast, B. (2007, January 28). (1879) Robert J. Harlan, “Migration is the Only Remedy for Our Wrongs”. BlackPast.org. https://www.blackpast.org/african-american-history/1879-robert-j-harlan-migration-only-remedy-our-wrongs/