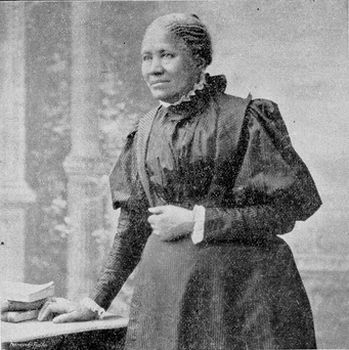 After the Civil War Frances Ellen Watkins Harper worked among African Americans as a representative of the Women’s Christian Temperance Union. From her new position Harper publicized the violence and intimidation in the South directed at the freedpeople. She argued African Americans must organize to complete the work of Reconstruction rather than relying on political parties or organizations. To that end black women must play an important role in these crucial efforts.

On April 14, 1875, Harper delivered an address in Philadelphia at the Centennial Anniversary of the nation’s oldest abolitionist society, the Pennsylvania Society for Promoting the Abolition of Slavery outlining the work yet to be done in the cause of African American freedom. That speech appears below.

Ladies and Gentlemen: The great problem to be solved by the American people, if I understand it, is this: Whether or not there is strength enough in democracy, virtue enough in our civilization, and power enough in our religion to have mercy and deal justly with four millions of people but lately translated from the old oligarchy of slavery to the new commonwealth of freedom; and upon the right solution of this question depends in a large measure the future strength, progress and durability of our nation. The most important question before us colored people is not simply what the Democratic party may do against us or the Republican party do for us; but what are we going to do for ourselves? What shall we do toward developing our character, adding our quota to the civilization and strength of the country, diversifying our industry, and practicing those lordly virtues that conquer success and turn the world’s dread laugh into admiring recognition? The white race has yet work to do in making practical the political axiom of equal rights and the Christian idea of human brotherhood; but while I lift mine eyes to the future I would not ungratefully ignore the past. One hundred years ago and Africa was the privileged hunting ground to Europe and America, and the flag of different nations hung a sign of death on the coasts of Congo and Guinea, and for years unbroken silence had hung around the horrors of the African slave trade. Since then Great Britain and other nations have wiped the bloody traffic from their hands and shaken the gory merchandise from their fingers, and the brand of piracy has been placed upon the African slave trade. Less than fifty years ago mob violence belched out its wrath against the men who dared to arraign the slave holder before the bar of conscience and Christendom. Instead of golden showers upon his head, he who garrisoned the front had a halter around his neck. Since, if I may borrow the idea, the nation has caught the old inspiration from his lips and written it in the new organic world. Less than twenty five years ago slavery clasped hands with King Cotton, and said slavery fights and cotton conquers for American slavery. Since then slavery is dead, the colored man has exchanged the fetters on his wrist for the ballot in his hand. Freedom is king, and Cotton a subject.

It may not seem to be a gracious thing to mingle complaint in a season of general rejoicing. It may appear like the ancient Egyptians seating a corpse at their festal board to avenge the Americans for their shortcomings when so much has been accomplished. And yet, with all the victories and triumphs which freedom and justice have won in this country, I do not believe there is another civilized nation under heaven where there are half as many people who have been brutally and shamefully murdered, with or without impunity, as in this Republic within the last ten years. And who cares? Where is the public opinion that has scorched with red hot indignation the cowardly murderers of Vicksburg and Louisiana? Sheridan lifts up the veil from Southern society, and behind it is the smell of blood and our bones scattered at the grave’s mouth; murdered people; a White League with its “covenant of death and agreement with hell.” And who cares? What city pauses one hour to drop a pitying tear over these mangled corpses, or has forged against the perpetrator one thunderbolt of furious protest? But let there be a supposed or real invasion of Southern rights by our soldiers, and our great commercial emporium will rally its forces from the old man in his classic shades, to clasp hands with “dead rabbits” and “plug uglies” in protesting against military interference. What we need today in the onward march of humanity is a public sentiment in favor of common justice and simple mercy. We have a civilization which has produced grand and magnificent results, diffused knowledge, overthrown slavery, made constant conquests over nature, and built up a wonderful material property. But two things are wanting in American civilization a keener and deeper, broader and tenderer sense of justice; a sense of humanity, which shall crystallize into the life of the nation the sentiment that justice, simple justice, is the right, not simply of the strong and powerful, but of the weakest and feeblest of all God’s children; a deeper and broader humanity, which will teach men to look upon their feeble brethren not as vermin to be crushed out, or beasts of burden to be bridled and bitten, but as the children of the living God; of that God whose may earnestly hope is in perfect wisdom and in perfect love working for the best good of all. Ethnologists may differ about the origin of the human race. Huxley may search for it in protoplasm, and Darwin send for the missing links, but there is one thing of which we may rest assured that we all come from the living God and that He is the common Father. The nation that has no reverence for man is also lacking in reverence for God and need to be instructed.

As fellow citizens, leaving out all humanitarian views as a mere matter of political economy it is better to have the colored race a living force animated and strengthened by self reliance and self respect, than a stagnant mass, degraded and self condemned. Instead of the North relaxing its efforts to defuse education in the South, it behooves us for our national life to throw into the South all the healthful reconstructing influences we can command.

Our work in this country is grandly constructive. Some races have come into this world and overthrown and destroyed. But if it is glory to destroy, it is happiness to save; and oh, what a noble work there is before our nation! Where is there a young man who would consent to lead an aimless life when there are such glorious opportunities before him? Before our young men is another battle not a battle of flashing swords and clashing steel, but a moral warfare, a battle against ignorance, poverty and low social condition. In physical warfare the keenest swords may be blunted and the loudest batteries hushed; but in the great conflict of moral and spiritual progress your weapons shall be brighter for their service and better for their use. In fighting truly and nobly for others you win the victory for yourselves.

Give power and significance to your life, and in the great work of upbuilding there is room for woman’s work and woman’s heart. Oh, that our hearts were alive and our vision quickened, to see the grandeur of the work that lies before. We have some culture among us, but I think our culture lacks enthusiasm. We need a deep earnestness and a lofty unselfishness to round out our lives. It is the inner life that develops the outer, and if we are in earnest the precious things lie all around our feet, and we need not waste our strength in striving after the dim and unattainable. Women, in your golden youth; mother, binding around your heart all the precious ties of life, let no magnificence of culture, or amplitude of fortune, or refinement of sensibilities, repel you from helping the weaker and less favored. If you have ampler gifts, hold them as larger opportunities with which you can benefit others. Oh, it is better to feel that the weaker and feebler our race the closer we will cling to them, than it is to isolate ourselves from them in selfish, or careless unconcern, saying there is a lion without. Inviting you to this work I do not promise you fair sailing and unclouded skies. You may meet with coolness where you expect sympathy; disappointment where you feel sure of success; isolation and loneliness instead of heart support and cooperation. But if your lives are based and built upon these divine certitudes, which are the only enduring strength of humanity, then whatever defeat and discomfiture may overshadow your plans or frustrate your schemes, for a life that is in harmony with God and sympathy for man there is no such word as fail. And in conclusion, permit me to say, let no misfortunes crush you, no hostility of enemies or failure of friends discourage you. Apparent failure may hold in its rough shell the germs of a success that will blossom in time, and bear fruit throughout eternity. What seemed to be a failure around the Cross of Calvary and in the garden has been the grandest recorded success.