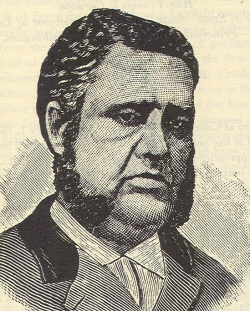 Francis Louis Cardozo, the freeborn son of an African American woman and a Jewish economist, was born in Charleston, South Carolina in 1837. Through his personal savings and a thousand dollar scholarship, Cardozo attended the University of Glasgow and later a theological school in London. By the beginning of the Civil War he was a Presbyterian minister in New Haven, Connecticut. After the war he returned to Charleston to become principal of Avery Institute, an academy for African Americans. Cardozo also entered politics and was a delegate to the South Carolina Constitutional Convention in 1868. Later he held the elected positions of Secretary of State and State Treasurer during the Reconstruction period. During the Constitutional Convention Cardozo opposed the “stay law” which prevented large plantations from being seized and sold for debt. Sensing the post-War poverty of the planter elite and recalling the plantations as” one of the greatest bulwarks of slavery,” he urged the reallocation of the lands to both black and white small farmers through marketplace capitalism. His speech appears below.

In discussing this measure, I would say to the gentleman who preceded me, and those who will follow, that they will accomplish their object much sooner and with much more satisfaction by not impugning the motives of those with whom they differ. The gentleman who spoke last, made gratuitous assumptions and ascribed mercenary motives that, were it not for personal friendship, might be retorted upon him with perhaps worse effect than he made them. He asserted that the gentlemen who opposed him opposed his race. I intend to show that his race is not at all connected with the matter. In giving my view of the measure, I shall not resort to mere declamation or appeals to passion or prejudice. In the fist place, I doubt its legality. It is true, it is said the Convention does not propose to legislate, but I contend that a request from this body carries a certain moral influence. It shows what it would do if it had the power. It is virtually legislation. I regard any stay law as unjust and unconstitutional. It is unjust to the creditors. Let every man who contracts a debt, pay for it. If he is an honest man he will pay his debts at any sacrifice. In our country it is unfortunate, as Americans, that we have a character by no means enviable as repudiators. Look at the attempt to repudiate the national debt. As an American, I protest against any further repudiation whatever, either in the form of a stay law or illegal legislation. I deem it inappropriate for us to touch the matter at all. We are sent here to form a Constitution. To travel outside of our proper province, will probably be to incur odium, displeasure and dissatisfaction. I wish to confine the action of this Convention to its proper sphere. The first question that arises is, what claim have these debtors on our sympathies more than creditors? Are the debtors greater in number than the creditors? If we legislate in favor of any, will it be doing the greatest good to the greatest number? I maintain it will not. It is a class measure. This will be but the beginning. We will be burdened with applications, and the burden will be upon those who introduced the measure, not upon those who refused to legislate for other special favorite classes. I ask not only what are the claims of the debtors, but also what are the nature of these sales? Was it the transfer of real estate? I think everyone here will say no. Nine tenths of the debts were contracted for the sale of slaves. I do not wish we should go one inch out of the way to legislate either for the buyer or the seller. They dealt in that kind of property, they knew its precarious tenure, and therefore let them suffer. When the war commenced every rebel sold his property to give money to a common cause. And their slaves were sold for the same object, to maintain a war waged for the purpose of perpetually enslaving a people. That was the object. The ladies of the South stripped themselves of their jewels, and the men sold their lands and their slaves for that object. Now, let them suffer for it. As the gentleman from Charleston very ably said, “they have cast the die, let them take their chances.”

There is also another reason, and one of the strongest, why the Convention should not take any action on the subject, but postpone it indefinitely. One of the greatest bulwarks of slavery was the infernal plantation system, one man owning his thousand, another is twenty, and another fifty thousand acres of land. This is the only way by which we will break up that system and I maintain that our freedom will be of no effect if we allow it to continue. What is the main cause of the prosperity of the North? It is because every man has his own farm and is free and independent. Let the lands of the South be similarly divided. I would not say for one moment they should be confiscated, but if sold to maintain the war, now that slavery is destroyed, let the plantation system go with it. We will never have true freedom until we abolish the system of agriculture which existed in the Southern states. It is useless to have any schools while we maintain this stronghold of slavery as the agricultural system of the country. The gentleman has said that if these plantations are sold now, they would pass into the hands of a few mercenary speculators. I deny it and challenge a single proof to sustain the assertion. On the contrary I challenge proof to show that if the plantations are not sold, the old plantation masters will part them. If they are sold, though a few mercenary speculators may purchase some, the chances are that the colored man and the poor man would be the purchasers. I will prove this, not by mere assertion, but by facts. About one hundred poor colored men of Charleston met together and formed themselves into a Charleston Land Company. They subscribed for a number of shares at $10 per share, one dollar payable monthly. They have been meeting for a year. Yesterday they purchased six hundred acres of land for $6,600 that would have sold for $25,000 or $50,000 in better times. They would not have been able to buy it had not the owner through necessity been compelled to sell. This is only one instance of thousands of others that have occurred in this city and state. I look upon it, therefore, as the natural result of the war that this system of large plantations, of no service to the owner or anybody else, should be abolished.

I think Providence has not only smiled upon every effort for abolishing this hideous form of slavery, but that since the war it has given unmistakable signs of disapprobation wherever continued, by blasting the cotton crops in that part of the country. Men are now beginning not to plant cotton but grain for food, and in doing so they are establishing a system of small farms, by which not only my race, but the poor whites and ninety-nine hundredths of the other thousands will be benefited. The real benefit from this legislation would inhere to not more than thirty thousand landholders against the seven hundred thousand poor people of the State. If we are to legislate in favor of a class at all, any honest man, any man who has the interest of the people at heart will legislate in favor of the great number. In speaking against the landholders, and in taking this position I do not cherish one feeling of enmity against them as a class or individuals. But this question takes a larger range and is one in which the whole country is involved. I can never sacrifice the interests of nine or ten millions to the interests of three hundred thousand, more especially when the three hundred thousand initiated the war and were the very ones who established and infernal Negro code and want to keep their lands until better times. They do not want that a nigger or a Yankee shall ever own a foot of their land. Now is the time to take the advantage. Give them an opportunity, breathing time, and they will reorganize the same old system they had before the war. I say, then, just as General Grant said when he had Lee hemmed in around Petersburg, now is the time to strike, and in doing so we will strike for our people and posterity, and the truest interest of our country.