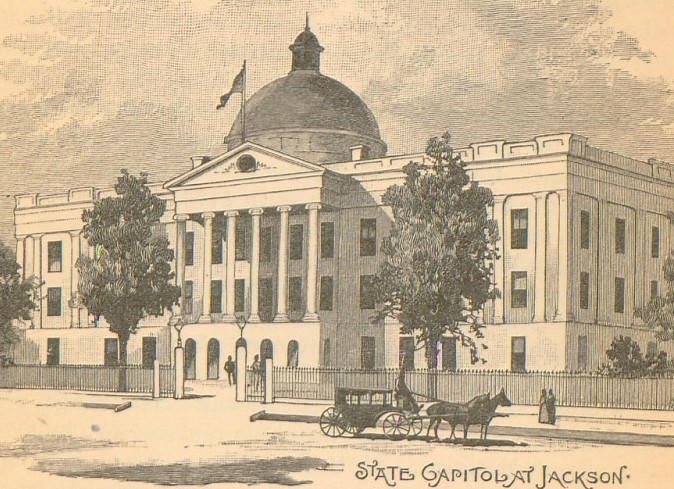 1. CIVIL RIGHTS OF FREEDMEN IN MISSISSIPPI

Sec.1. Be it enacted,… That all freedmen, free negroes, and mulattoes may sue and be sued, implead and be impleaded, in all the courts of law and equity of this State, and may acquire personal property, and choses in action, by descent or purchase, and may dispose of the same in the same manner and to the same extent that white persons may: Provided, That the provisions of this section shall not be so construed as to allow any freedman, free negro, or mulatto to rent or lease any lands or tenements except in incorporated cities or towns, in which places the corporate authorities shall control the same….

Sec. 3….All freedmen, free negroes, or mulattoes who do now and have herebefore lived and cohabited together as husband and wife shall be taken and held in law as legally married, and the issue shall be taken and held as legitimate for all purposes; that it shall not be lawful for any freedman, free negro, or mulatto to intermarry with any white person; nor for any white person to intermarry with any freedman, free negro, or mulatto; and any person who shall so intermarry, shall be deemed guilty of felony, and on conviction thereof shall be confined in the State penitentiary for life; and those shall be deemed freedmen, free negroes, and mulattoes who are of pure negro blood, and those descended from a negro to the third generation, inclusive, though one ancestor in each generation may have been a white person.

Sec. 4….In addition to cases in which freedmen, free negroes, and mulattoes are now by law competent witnesses, freedmen, free negroes, or mulattoes shall be competent in civil cases, when a party or parties to the suit, either plaintiff or plaintiffs, defendant or defendants, and a white person or white persons, is or are the opposing party or parties, plaintiff or plaintiffs, defendant or defendants. They shall also be competent witnesses in all criminal prosecutions where the crime charged is alleged to have been committed by a white person upon or against the person or property of a freedman, free negro, or mulatto: Provided, that in all cases said witnesses shall be examined in open court, on the stand; except, however, they may be examined before the grand jury, and shall in all cases be subject to the rules and tests of the common law as to competency and credibility….

Sec. 6….All contracts for labor made with freedmen, free negroes, and mulattoes for a longer period than one month shall be in writing, and in duplicate, attested and read to said freedman, free negro, or mulatto by a beat, city or county officer, or two disinterested white persons of the county in which the labor is to be performed, of which each party shall have one; and said contracts shall be taken and held as entire contracts, and if the laborer shall quit the service of the employer before the expiration of his term of service, without good cause, he shall forfeit his wages for that year up to the time of quitting.

Sec. 7….Every civil officer shall, and every person may, arrest and carry back to his or her legal employer any freedman, free negro, or mulatto who shall have quit the service of his or her employer before the expiration of his or her term of service without good cause; and said officer and person shall be entitled to receive for arresting and carrying back every deserting employe aforesaid the sum of five dollars, and ten cents per mile from the place of arrest to the place of delivery; and the same shall be paid by the employer, and held as a set-off for so much against the wages of said deserting employe: Provided, that said arrested party, after being so returned, may appeal to the justice of the peace or member of the board of police of the county, who, on notice to the alleged employer, shall try summarily whether said appellant is legally employed by the alleged employer, and has good cause to quit said employer; either party shall have the right of appeal to the county court, pending which the alleged deserter shall be remanded to the alleged employer or otherwise disposed of, as shall be right and just; and the decision of the county court shall be final….

Sec. 1….It shall be the duty of all sheriffs, justices of the peace, and other civil officers of the several counties in this State, to report to the probate courts of their respective counties semi-annually, at the January and July terms of said courts, all freedmen, free negroes, and mulattoes, under the age of eighteen, in their respective counties, beats or districts, who are orphans, or whose parent or parents have not the means or who refuse to provide for and support said minors; and thereupon it shall be the duty of said probate court to order the clerk of said court to apprentice said minors to some competent and suitable person, on such terms as the court may direct, having a particular care to the interest of said minor: Provided, that the former owner of said minors shall have the preference when, in the opinion of the court, he or she shall be a suitable person for that purpose.

Sec. 2….The said court shall be fully satisfied that the person or persons to whom said minor shall be apprenticed shall be a suitable person to have the charge and care of said minor, and fully to protect the interest of said minor. The said court shall require the said master or mistress to execute bond and security, payable to the State of Mississippi, conditioned that he or she shall furnish said minor with sufficient food and clothing; to treat said minor humanely; furnish medical attention in case of sickness; teach, or cause to be taught, him or her to read and write, if under fifteen years old, and will conform to any law that may be hereafter passed for the regulation of the duties and relation of master and apprentice….

Sec. 3….In the management and control of said apprentice, said master or mistress shall have the power to inflict such moderate corporal chastisement as a father or guardian is allowed to inflict on his or her child or ward at common law: Provided, that in no case shall cruel or inhuman punishment be inflicted.

Sec. 1. Be it enacted, etc.,…That all rogues and vagabonds, idle and dissipated persons, beggars, jugglers, or persons practicing unlawful games or plays, runaways, common drunkards, common night-walkers, pilferers, lewd, wanton, or lascivious persons, in speech or behavior, common railers and brawlers, persons who neglect their calling or employment, misspend what they earn, or do not provide for the support of themselves or their families, or dependents, and all other idle and disorderly persons, including all who neglect all lawful business, habitually misspend their time by frequenting houses of ill-fame, gaming-houses, or tippling shops, shall be deemed and considered vagrants, under the provisions of this act, and upon conviction thereof shall be fined not exceeding one hundred dollars, with all accruing costs, and be imprisoned at the discretion of the court, not exceeding ten days.

Sec. 7….If any freedman, free negro, or mulatto shall fail or refuse to pay any tax levied according to the provisions of the sixth section of this act, it shall be prima facie evidence of vagrancy, and it shall be the duty of the sheriff to arrest such freedman, free negro, or mulatto or such person refusing or neglecting to pay such tax, and proceed at once to hire for the shortest time such delinquent tax-payer to any one who will pay the said tax, with accruing costs, giving preference to the employer, if there be one….

Sec. 1. Be it enacted,…That no freedman, free negro or mulatto, not in the military service of the United States government, and not licensed so to do by the board of police of his or her county, shall keep or carry fire-arms of any kind, or any ammunition, dirk or bowie knife, and on conviction thereof in the county court shall be punished by fine, not exceeding ten dollars, and pay the costs of such proceedings, and all such arms or ammunition shall be forfeited to the informer; and it shall be the duty of every civil and military officer to arrest any freedman, free negro, or mulatto found with any such arms or ammunition, and cause him or her to be committed to trial in default of bail.

2….Any freedman, free negro, or mulatto committing riots, routs, affrays, trespasses, malicious mischief, cruel treatment to animals, seditious speeches, insulting gestures, language, or acts, or assaults on any person, disturbance of the peace, exercising the function of a minister of the Gospel without a license from some regularly organized church, vending spirituous or intoxicating liquors, or committing any other misdemeanor, the punishment of which is not specifically provided for by law, shall, upon conviction thereof in the county court, be fined not less than ten dollars, and not more than one hundred dollars, and may be imprisoned at the discretion of the court, not exceeding thirty days.

Sec. 3….If any white person shall sell, lend, or give to any freedman, free negro, or mulatto any fire-arms, dirk or bowie knife, or ammunition, or any spirituous or intoxicating liquors, such person or persons so offending, upon conviction thereof in the county court of his or her county, shall be fined not exceeding fifty dollars, and may be imprisoned, at the discretion of the court, not exceeding thirty days….

Sec. 5….If any freedman, free negro, or mulatto, convicted of any of the misdemeanors provided against in this act, shall fail or refuse for the space of five days, after conviction, to pay the fine and costs imposed, such person shall be hired out by the sheriff or other officer, at public outcry, to any white person who will pay said fine and all costs, and take said convict for the shortest time.