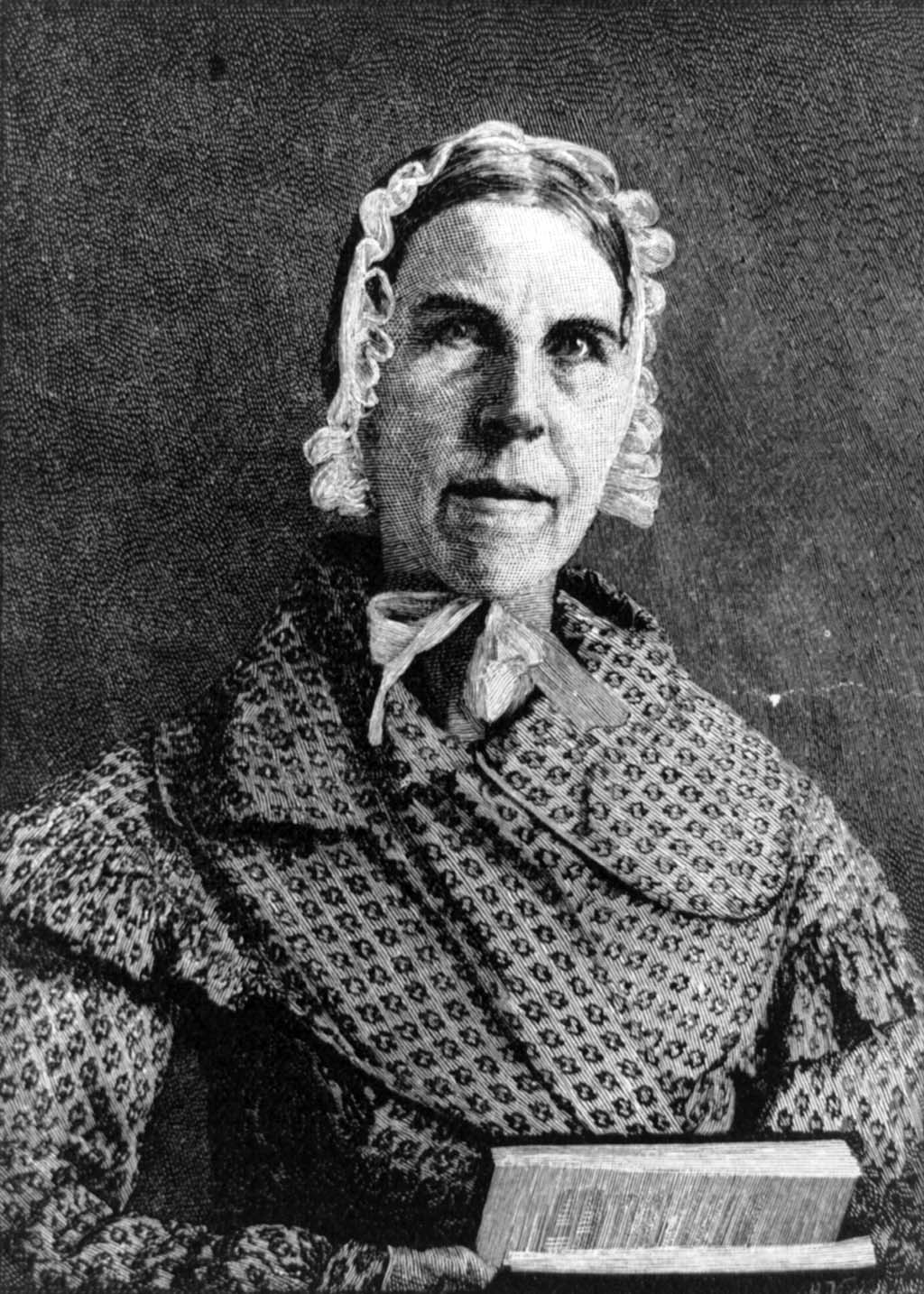 By the time of the Civil War Angelina Grimke Weld had spent three decades fighting the institution of slavery.   The Civil War and especially the Emancipation Proclamation which went into effect on January 1, 1863, seemed inevitably to bring her work to her desired conclusion.  Nonetheless in the Spring of 1863, the outcome of the war was hardly certain.  Grimke Weld, invited to speak at the Women’s Loyal National League in New York City, used the occasion to urge the North to “go on, go on! until the slaves were in fact free.  Her address appears below.

I came here with no desire and no intention to speak; but my heart is full, my country is bleeding, my people are perishing around me. But I feel as a South Carolinian, I am bound to tell the North, go on! go on! Never falter, never abandon the principles which you have adopted. I could but say thus when it was proclaimed in the Northern States that the Union was all that we sought. No, my friends, such a Union as we had then, God be praised that it has perished. Oh, never for one moment consent that such a Union should be reestablished in our land. There was a time when I looked upon the Fathers of the Revolution with the deepest sorrow and the keenest reproach. I said to their shadows in another world, “Why did you leave this accursed system of slavery for us to suffer and die under? why did you not, with a stroke of the pen, determine — when you acquired your own independence – that the principles which you adopted in the Declaration of Independence should be  shield of protection to every man, whether he be slave or whether he be free?”

But, my friends, the experience of sixty years has shown me that the fruit grows slowly. I look back and see that great Sower of the world, as he traveled the streets of Jerusalem and dropped the precious seed, “Do unto others as ye would that others should do unto you.” I look at all the contests of different nations, and see that, whether it were the Patricians of Rome, England, France, or any part of Europe, every battle fought gained something to freedom. Our fathers, driven out by the oppression of England, came to this country and planted that little seed of liberty upon the soil of New England. When our Revolution took place, that seed was only in the process of sprouting. You must recollect that our Declaration of Independence was the very first National evidence of the great doctrine of brotherhood and equality. I verily believe that those who were the true lovers of liberty did all they could at that time. In their debates in the Convention they denounced slavery – they protested against the hypocrisy and inconsistency of a nation declaring such glorious truths, and then trampling them underfoot by enslaving the poor and oppressed, because be had a skin not colored like their own; as though a man’s skin should make any difference in the recognition of his rights, any more than the color of his hair or his eyes. This little blade sprouted as it were from the precious seeds that were planted by Jesus of Nazareth. But, my friends, if it took eighteen hundred years to bring forth the little blade which was seen in our Declaration, are we not unreasonable to suppose that more could have been done than has been done, looking at the imperfection of human nature, looking at the selfishness of man, looking at his desire for wealth and his greed for glory?

Had the South yielded at that time to the freemen of the North, we should have bad a free Government; but it was impossible to overcome the long and strong prejudices of the South in favor of slavery. I know what the South is. I lived there the best part of my life. I never could talk against slavery without making my friends angry – never. When they thought the day was far off, and there was no danger of emancipation, they were willing to admit it was an evil; but when God in His providence raised up in this country an Anti-slavery Society, protesting against the oppressions of the colored man, they began to feel that truth which is more powerful than arms – that truth which is the only banner under which we can successfully fight. They were comparatively quiet till they found, in the election of Mr. Lincoln, the scepter had actually departed from them. His election took place on the ground that slavery was not to be extended – that it must not pass into the Territories. This was what alarmed them. They saw that if the National Government should take one such step, it never would stop there; that this principle had never before been acknowledged by those who had any power in the nation.

God be praised. Abolitionists never sought place or power. All they asked was freedom; all they wanted was that the white man should take his foot off the negro’s neck. The South determined to resist the election of Mr. Lincoln. They determined if Fremont was elected, they would rebel. And this rebellion is like their own Republic, as they call it; it is founded upon slavery. As I asked one of my friends one day, “What are you rebelling for? The North never made any laws for you that they have not cheerfully obeyed themselves. What is the trouble between us?” Slavery, slavery is the trouble. Slavery is a “divine institution.” My friends, it is a fact that the South has incorporated slavery into her religion; that is the most fearful thing in this rebellion. They are fighting, verily believing that they are doing God service. Most of them have never seen the North. They understand very little of the working of our institutions; but their politicians are stung to the quick by the prosperity of the North. They see that the institution which they have established can not make them wealthy, can not make them happy, can not make them respected in the world at large, and their motto is, “Rule or ruin.”

Before I close, I would like, however strange it may seem, to utter a protest against what Mrs. Stanton said of colonizing the aristocrats in Liberia. I can not consent to such a thing. Do you know that Liberia has never let a slave tread her soil? – that when, from the interior of the country, the slaves came there to seek shelter, and their heathen master pursued them, she never surrendered one? She stands firmly on the platform of freedom to all. I am deeply interested in this colony of Liberia. I do not want it to be cursed with the aristocracy of the South, or any other aristocracy, and far less with the Copperheadism of the North. If these Southern aristocrats are to be colonized, Mrs. President, don’t you think England is the best place for them? England is the country which has sympathized most deeply with them. She has allowed vessels to be built to prey upon our commerce; she has sent them arms and ammunition, and everything she could send through the West India Islands. Shall we send men to Libera, who are ready to tread the black men under their feet? No. God bless Liberia for what she has done, and what she is destined to do.

I am very glad to say here, that last summer I had the pleasure of entertaining several times, in our house, a Liberian who was well educated in England. He had graduated at Oxford College, and had a high position there. His health broke down, and he went to Liberia. “When I went to Liberia,” said he, “I had a first-rate education, and I supposed, of course, I would be a very superior man there; but I soon found that, though I knew a great deal more Greek and Latin and mathematics than most of the men there, I was a child to them in the science of government and history. “Why,” said he, “you have no idea of the progress of Liberia. The men who go there are freemen – citizens; the burdens of society are upon them; and they feel that they must begin to educate themselves, and they are self-educated men. The President of Liberia, Mr. Benson, was a slave about seven years ago on a plantation in this country. He went to Liberia. He was a man of uncommon talents. He educated himself to the duties which he found himself called upon to perform as a citizen. And when Mr. Benson visited England a year ago, he had a perfect ovation. The white ladies and gentlemen of England, those who were really anti-slavery in their feelings – who love liberty – followed him wherever he went. They opened their houses, they had their soirees, and they welcomed him by every kind of demonstration of their good wishes for Liberia.”

Now, Mrs. President, the great object that I had in view in rising, was to give you a representative from South Carolina. I mourn exceedingly that she has taken the position she has. I once had a brother who, had he been there, would have stood by judge Pettigrew in his protest against the action of the South. He, many years ago, during the time of nullification in 1832, was in the Senate of South Carolina, and delivered an able address, in which he discussed these very points, and showed that the South had no right of secession; that, in becoming an integral part of the United States, they had themselves voluntarily surrendered that right. And he remarked, “If you persist in this contest, you will be like a girdled tree, which must perish and die. You can not stand.”