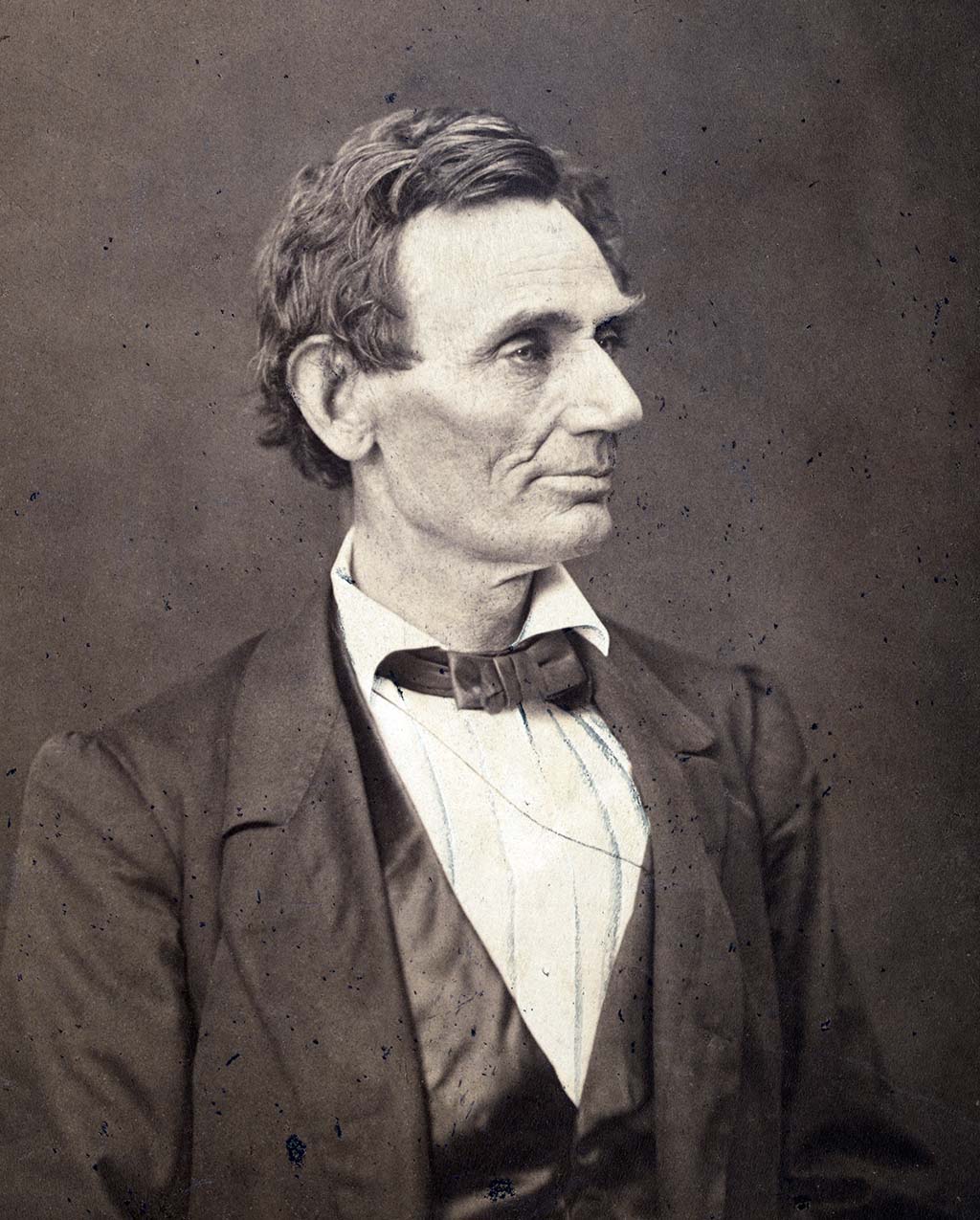 On June 16, 1858, only three hours after the Illinois Republican Party nominated him as its candidate for the United States Senate from that state, Abraham Lincoln gave his “A House Divided” speech in Springfield, Illinois.  That speech became the most famous oration from an anti-slavery politician delivered before the U.S. Civil War.  The entire speech appears below:

MR. PRESIDENT, AND GENTLEMEN OF THE CONVENTION. We are now far into the fifth year since a policy was initiated, with the avowed object, and confident promise, of putting an end to slavery agitation.

Under the operation of that policy, that agitation has not only, not ceased, but has constantly augmented.

In my opinion, it will not cease, until a crisis shall have been reached, and passed.
“A house divided against itself cannot stand.”

I believe this Government cannot endure, permanently half slave and half free.

It will become all one thing or all the other.

Either the opponents of slavery, will arrest the further spread of it, and place it where the public mind shall rest in the belief that it is in the course of ultimate extinction; or its advocates will push it forward, till it shall become alike lawful in all the States, old as well as new-North as well as South.

Have we no tendency to the latter condition?

Let anyone who doubts carefully contemplate that now almost complete legal combination-piece of machinery, so as to speak-compounded of the Nebraska doctrine and the Dred Scott decision…

But, so far, Congress only had acted, and an indorsement by the people, real or apparent, was indispensable, to save the point already gained and give chance for more.

This necessity had not been overlooked, but had been provided for, as well as might be, in the notable argument of “Squatter Sovereignty,” otherwise called “sacred right of self-government,” which latter phrase, though expressive of the only rightful basis of any government, was so perverted in this attempted use of it as to amount to just this: That if anyone man choose to enslave another, no third man shall be allowed to object. That argument was incorporated into the Nebraska Bill itself, in the language which follows: “It being the true intent and meaning of this act not to legislate slavery into any Territory or State, nor to exclude it therefrom, but to leave the people thereof perfectly free to form and regulate their domestic institutions in their own way, subject only to the Constitution of the United States,”

Then opened the roar of loose declamation in favor of “Squatter Sovereignty,” and “sacred right of self-government,” “But,” said opposition members, “let us amend the bill so as to expressly declare that the people of the Territory may exclude Slavery.” “Not we,” said the friends of the measure; and down they voted the amendment.

While the Nebraska Bill was passing through Congress, a law case involving the question of a Negro’s freedom, by reason of his owner having voluntarily taken him first into a Free State and then into a Territory covered by the congressional prohibition, and held him as a slave for a long time in each, was passing through the United States Circuit Court for the District of Missouri; and both Nebraska Bill and lawsuit were brought to a decision in the same month of May 1854. The Negro’s name was “Dred Scott,” which name now designates the decision finally made in the case…

The several points of the Dred Scott decision, in connection with Senator Douglas’s “care-not” policy, constitute the piece of machinery, in its present state of advancement…

First, that no Negro slave, imported as such from Africa, and no descendant of such slave, can ever be a citizen of any State, in the sense of that term as used in the Constitution of the United States. This point is made in order to deprive the Negro, in every possible event, of the benefit of that provision of the United States Constitution, which declares that: “The citizens of each State shall be entitled to all privileges and immunities of citizens in the several States.”

Second, that “subject to the Constitution of the United States,” neither Congress nor a Territorial legislature can exclude slavery from any United States Territory. This point is made in order that individual men may fill up the Territories with slaves, without danger of losing them as property, and thus to enhance the chances of permanency to the institution through all the future.

Third, that whether the holding a Negro in actual slavery in a free State makes him free, as against the holder, the United States courts will not decide, but will leave to be decided by the courts of any slave State the negro may be forced into by the master…

Auxiliary to all this, and working hand in hand with it, the Nebraska doctrine, or what is left of it, is to educate and mold public opinion, at least Northern public opinion, not to care whether slavery is voted down or voted up. This shows exactly where we now are; and partially, also, whither we are tending.

In what cases the power of the States is so restrained by the United States Constitution is left an open question, precisely as the same question, as to the restraint on the power of the Territories, was left open in the Nebraska Act. Put this and that together, and we have another nice little niche which we may ere long see filled with another Supreme Court decision, declaring that the Constitution of the United States does not permit a State to exclude slavery from its limits. And this may especially be expected if the doctrine of” care not whether slavery be voted down or voted up,” shall gain upon the public mind sufficiently to give promise that such a decision can be maintained when made.

Such a decision is all that slavery now lacks of being alike lawful in all the States. Welcome, or unwelcome, such decision is probably coming, and will soon be upon us, unless the power of the present political dynasty shall be met and overthrown. We shall lie down pleasantly dreaming that the people of Missouri are on the verge of making their State free, and we shall awake to the reality instead, that the Supreme Court has made Illinois a slave State. To meet and overthrow the power of that dynasty is the work now before all those who would prevent that consummation.

This is what we have to do.

But how can we best do it? There are those who denounce us openly to their own friends and yet whisper us softly, that Senator Douglas is the aptest instrument there is with which to effect that object. They wish us to infer all from the fact that he now has a little quarrel with the present head of the dynasty; and that he has regularly voted with us on a single point, upon which he and we have never differed. They remind us that he is a great man, and that the largest of us are very small ones. Let this be granted. But “a living dog is better than a dead lion.” Judge Douglas, if not a dead lion for this work, is at least a caged and toothless one. How can he oppose the advances of slavery? He does not care anything about it. His avowed mission is impressing the “public heart” to care nothing about it. A leading Douglas Democratic newspaper thinks Douglas’s superior talent will be needed to resist the revival of the African slave trade. Does Douglas believe an effort to revive that trade is approaching? He has not said so. Does he really think so? But if it is, how can he resist it? For years he has labored to prove it a sacred right of white men to take negro slaves into the new Territories. Can he possibly show that it is less a sacred right to buy them where they can be bought cheapest? And unquestionably they can be bought cheaper in Africa than in Virginia. He has done all in his power to reduce the whole question of slavery to one of a mere right of property; and as such, how can he oppose the foreign slave trade—how can he refuse that trade in that “property” shall be “perfectly free”—unless he does it as a protection to the home production? And as the home producers will probably not ask the protection, he will be wholly without a
ground of opposition.

Senator Douglas holds, we know, that a man may rightfully be wiser today than he was yesterday-that he may rightfully change when he finds himself wrong. But can we, for that reason, run ahead, and infer that he will make any particular change, of which he, himself, has given no intimation? Can we safely base our action upon any such vague inference? Now, as ever, I wish not to misrepresent Judge Douglas’s position, question his motives, or do aught that can be personally offensive to him. Whenever, if ever, he and we can come together on principle so that our cause may have assistance from his great ability, I hope to have interposed no adventitious obstacle. But clearly, he is not
now with us-he does not pretend to be-he does not promise to ever be.

Our cause, then, must be intrusted to, and conducted by, its own undoubted friends-those whose hands are free, whose hearts are in the work-who do care for the result. Two years ago the Republicans of the nation mustered over thirteen hundred thousand strong. We did this under the single impulse of resistance to a common danger, with every external circumstance against us. Of strange, discordant, and even hostile elements, we gathered from the four winds, and formed and fought the battle through, under the constant hot fire of a disciplined, proud, and pampered enemy. Did we brave all them to falter now?-now-when that same enemy is wavering, dissevered, and belligerent? The result is not doubtful. We shall not fail-if we stand firm, we shall not fail. Wise counsels may accelerate, or mistakes delay it, but, sooner or later, the victory is sure to come.