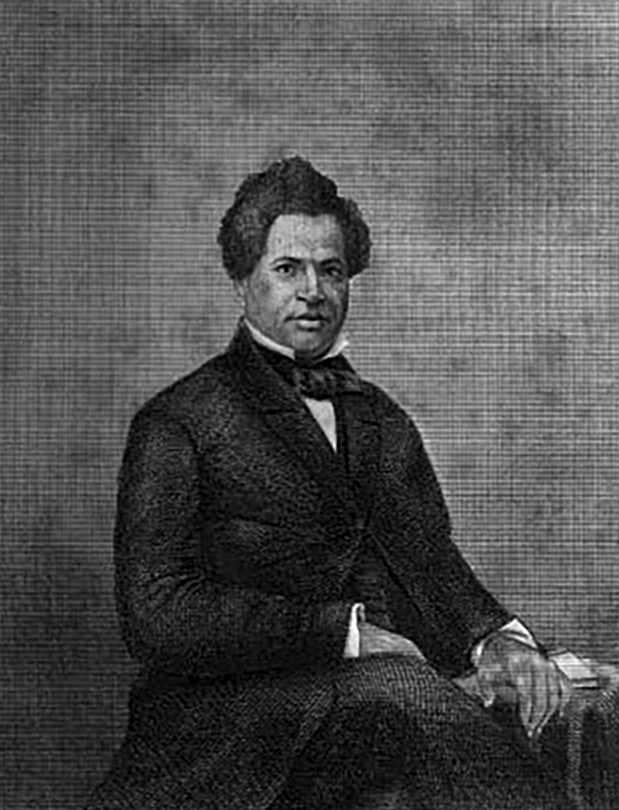 A month after the infamous Fugitive Slave Act was passed by Congress, Rev. Jermain Wesley Loguen (1813-1872), a fugitive slave from Tennessee, persuaded his adopted hometown, Syracuse, New York, to declare that city a refuge for liberated slaves. On October 4, 1850, the people of Syracuse filled city hall to hear a discussion of the recently passed law. Samuel Ringgold Ward, a well known minister and anti-slavery activist, spoke in opposition to the Act. Ward was followed by Rev. Loguen (1813-1872). Like Ward who was also a fugitive slave, Loguen knew first hand the horrors of the institution and the immediate danger he faced by the passage of the new Act. He appealed to his fellow citizens to honor the Constitution by dishonoring the law that would reenslave him and others. He argued that his continued freedom depended upon the willingness of his white fellow citizens to resist the law and protect him if he were threatened. Following his plea that Syracuse be made an “open city” for fugitive slaves, the meeting voted 395 to 96 in favor of his proposal. Loguen later became a Bishop of the African Methodist Episcopal Church. His speech appears below:

I WAS A SLAVE; I knew the dangers I was exposed to. I had made up my mind as to the course I was to take. On that score I needed no counsel, nor did the colored citizens generally. They had taken their stand—they would not be taken back to slavery. If to shoot down their assailants should forfeit their lives, such result was the least of the evil. They will have their liberties or die in their defense. What is life to me if I am to be a slave in Tennessee? My neighbors! I have lived with you many years, and you know me. My home is here, and my children were born here. I am bound to Syracuse by pecuniary interests, and social and family bonds. And do you think I can be taken away from you and from my wife and children, and be a slave in Tennessee? Has the President and his Secretary sent this enactment up here, to you, Mr. Chairman, to enforce on me in Syracuse?—and will you obey him? Did I think so meanly of you—did I suppose the people of Syracuse, strong as they are in numbers and love of liberty—or did I believe their love of liberty was so selfish, unmanly and unchristian—did I believe them so sunken and servile and degraded as to remain at their homes and labors, or, with none of that spirit which smites a tyrant down, to surround a United States Marshal to see me torn from my home and family, and hurled back to bondage—I say did I think so meanly of you, I could never come to live with you. Nor should I have stopped, on my return from Troy, twenty-four hours since, but to take my family and movables to a neighborhood which would take fire, and arms, too, to resist the least attempt to execute this diabolical law among them. Some kind and good friends advise me to quit my country, and stay in Canada, until this tempest is passed. I doubt not the sincerity of such counsellors. But my conviction is strong, that their advice comes from a lack of knowledge of themselves and the case in hand. I believe that their own bosoms are charged to the brim with qualities that will smite to the earth the villains who may interfere to enslave any man in Syracuse. I apprehend the advice is suggested by the perturbation of the moment, and not by the tranquil spirit that rules above the storm, in the eternal home of truth and wisdom. Therefore I have hesitated to adopt this advice, at least until I have the opinion of this meeting. Those friends have not canvassed this subject. I have. They are called suddenly to look at it. I have looked at it steadily, calmly, resolutely, and at length defiantly, for a long time. I tell you the people of Syracuse and of the whole North must meet this tyranny and crush it by force, or be crushed by it. This hellish enactment has precipitated the conclusion that white men must live in dishonorable submission, and colored men be slaves, or they must give their physical as well as intellectual powers to the defense of human rights. The time has come to change the tones of submission into tones of defiance,—and to tell Mr. Fillmore and Mr. Webster, if they propose to execute this measure upon us, to send on their bloodhounds. Mr. President, long ago I was beset by over-prudent and good men and women to purchase my freedom. Nay, I was frequently importuned to consent that they purchase it, and present it as evidence of their partiality to my person and character. Generous and kind as those friends were, my heart recoiled from the proposal. I owe my freedom to the God who made me, and who stirred me to claim it against all other beings in God’s universe. I will not, nor will I consent, that anybody else shall countenance the claims of a vulgar despot to my soul and body. Were I in chains, and did these kind people come to buy me out of prison, I would acknowledge the boon with inexpressible thankfulness. But I feel no chains, and am in no prison. I received my freedom from Heaven, and with it came the command to defend my title to it. I have long since resolved to do nothing and suffer nothing that can, in any way, imply that I am indebted to any power but the Almighty for my manhood and personality.

Now, you are assembled here, the strength of this city is here to express their sense of this fugitive act, and to proclaim to the despots at Washington whether it shall be enforced here—whether you will permit the government to return me and other fugitives who have sought asylum among you, to the Hell of slavery. The question is with you. If you will give us up, say so, and we will shake the dust from our feet and leave you. But we believe better things. We know you are taken by surprise. The immensity of this meeting testifies to the general consternation that has brought it together, necessarily, precipitately, to decide the most stirring question that can be presented, to wit, whether, the government having transgressed Constitutional and natural limits, you will bravely resist its aggressions, and tell its soulless agents that no slaveholder shall make your city and county a hunting field for slaves.

Whatever may be your decision, my ground is taken. I have declared it everywhere. It is known over the state and out of the state—over the line in the North, and over the line in the South. I don’t respect this law—I don’t fear it—I won’t obey it! It outlaws me, and I outlaw it, and the men who attempt to enforce it on me. I place the governmental officials on the ground that they place me. I will not live a slave, and if force is employed to reenslave me, I shall make preparations to meet the crisis as becomes a man. If you will stand by me—and I believe you will do it, for your freedom and honor are involved as well as mine—it requires no microscope to see that—I say if you will stand with us in resistance to this measure, you will be the saviors of your country. Your decision to-night in favor of resistance will give vent to the spirit of liberty, and it will break the bands of party, and shout for joy all over the North. Your example only is needed to be the type of popular action in Auburn, and Rochester, and Utica, and Buffalo, and all the West, and eventually in the Atlantic cities. Heaven knows that this act of noble daring will break out somewhere—and may God grant that Syracuse be the honored spot, whence it shall send an earthquake voice through the land!