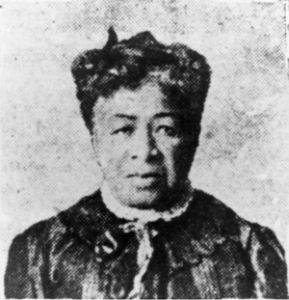 Lucy Stanton Day Sessions, I Shall Have Your Sympathy, If Your Judgment Refuses Me Your Support (1864)
Courtesy Papers of Ellen Lawson and Marlene D. Merrill, Oberlin College Archives

Lucy Stanton was probably the first African American woman to complete a four-year collegiate course of study. Stanton, the daughter of John Brown, a Cleveland barber active in the Underground Railroad, enrolled in nearby Oberlin Collegiate Institute (now Oberlin College) in northern Ohio. The institution would soon be noted for its abolitionist politics and admission of both male and female African American students. In 1850, Stanton completed the “ladies’ course,” which, unlike the B.A. program, required no Greek, Latin, or higher mathematics.

As president of the Oberlin Ladies Literary Society, Stanton was invited to offer a graduation address at the commencement exercises on August 27, 1850. Delivered just two weeks before the enactment of the Fugitive Slave Act, a time when black and white abolitionists felt the cause was experiencing its greatest difficulty in years, Stanton bravely called upon her fellow women students to embrace the anti-slavery campaign. She also envisioned, perhaps to the surprise of many in her audience, the day in the not to distant future when slavery would be destroyed.

When I forget you, Oh my people, may my tongue cleave to the roof of my mouth, and may my right hand forget her cunning! Dark hover the clouds. The Anti-Slavery pulse beats faintly. The right of suffrage is denied. The colored man is still crushed by the weight of oppression. He may possess talents of the highest order, yet for him is no path of fame or distinction opened. He can never hope to attain those privileges while his brethren remain enslaved. Since, therefore, the freedom of the slave and the gaining of our rights, social and political, are inseparably connected, let all the friends of humanity plead for those who may not plead their own cause.

Reformers, ye who have labored long to convince man that happiness is found alone in doing good to others, that humanity is a unit, that he who injures one individual wrongs the race;—that to love one’s neighbor as one’s self is the sum of human virtue—ye that advocate the great principles of Temperance, Peace, and Moral Reform will you not raise your voice in behalf of these stricken ones!–will you not plead the cause of the Slave?

Slavery is the combination of all crime. It is War.

Those who rob their fellow-men of home, of liberty, of education, of life, are really at war against them as though they cleft them down upon the bloody field. It is intemperance; for there is an intoxication when the fierce passions rage in man’s breast, more fearful than the madness of the drunkard, which if let loose upon the moral universe would sweep away everything pure and holy, leaving but the wreck of man’s nobler nature. Such passions does Slavery foster—yea, they are a part of herself. It is full of pollution. Know you not that to a slave, virtue is a sin counted worthy of death? That many, true to the light within, notwithstanding the attempts to shut out the truth, feeling that a consciousness of purity is dearer than life, have nobly died? Their blood crieth to God, a witness against the oppressor.

Statesmen, you who have bent at ambition’s shrine, who would leave your names on the page of history, to be venerated by coming generations as among those of the great and good, will you advocate the cause of the down-trodden, remembering that the spirit of liberty is abroad in the land? The precious seed is sown in the heart of the people, and though the fruit does not appear, the germ is there, and the harvest will yet be gathered. Truly is this an age of reform. The world is going on, not indeed keeping pace with the rapid tread of its leaders, but none the less progressing. As the people take a step in one reform, the way is prepared for another. Now while other evils in man’s social and political condition are being remedied, think you that Slavery can stand the searching test—an enlightened people’s sense of justice? Then speak the truth boldly; fear not loss of property or station. It is a higher honor to embalm your name in the hearts of a grateful people than to contend for the paltry honors of party preferment.

Woman, I turn to thee. Is it not thy mission to visit the poor? to shed the tear of sympathy? to relieve the wants of the suffering? Where wilt thou find objects more needing sympathy than among the slaves!

Mother, hast thou a precious gem in thy charge, like those that make up the Savior’s jewels? Has thy heart, trembling with its unutterable joyousness, bent before the throne of the Giver with the prayer that thy child might be found in his courts? Thou hast seen the dawning of intelligence in its bright eye, and watched with interest the unfolding of its powers. Its gentle, winning ways have doubly endeared it to thee. Death breathes upon the flower, and it is gone. Now thou canst feel for the slave-mother who has bent with the same interest over her child, whose heart is entwined around it even more firmly than thine own around thine, for to her it is the only ray of joy in a dreary world. She returns weary and sick at heart from the labors of the field; the child’s beaming smile of welcome half banishes the misery of her lot. Would she not die for it? Ye who know the depths of a mother’s love, answer! Hark! Strange footsteps are near her dwelling! The door is thrown rudely open! Her master says—”There is the woman!” She comprehends it all—she is sold! From her trembling lips escape the words—”my child!” She throws herself at the feet of those merciless men, and pleads permission to keep her babe, but in vain. What is she more than any other slave, that she should be permitted this favor? They are separated.

Sister, have you ever had a kind and loving brother? How often would he lay aside his book to relieve you from some difficulty? How have you hung upon the words of wisdom that he has uttered? How earnestly have you studied that you might stand his companion—his equal. You saw him suddenly stricken by the destroyer. Oh! How your heart ached!

There was a slave-girl who had a brother kind and noble as your own. He had scarcely any advantages: yet stealthily would he draw an old volume from his pocket, and through the long night would pore over its contents. His soul thirsted for knowledge. He yearned for freedom, but free-soil was far away. That sister might not go, he staid with her. They say that slaves do not feel for or love each other; I fear that there are few brothers with a pale face who would have stood that test. For her he tamed the fire of his eye, toiled for that which profited him not, and labored so industriously that the overseer had no apology for applying the lash to his back. Time passed on: that brother stood in his manhood’s prime as tenderly kind and as dearly beloved as ever. That sister was insulted;–the lash was applied to her quivering back; her brother rushed to save her! He tore away the fastenings which bound her to the whipping post, he held her on his arm–she was safe. She looked up, encountered the ferocious gaze of the overseer, heard the report of a pistol, and felt the heart’s blood of a brother gushing over her. But we draw the veil.

Mother, sister, by thy own deep sorrow of heart; by the sympathy of thy woman’s nature, plead for the downtrodden of thy own, of every land. Instill the principles of love, of common brotherhood, in the nursery, in the social circle. Let these be the prayer of thy life.

Christians, you whose souls are filled with love for your fellow men, whose prayer to the Lord is, “Oh! that I may see thy salvation among the children of men!” Does the battle wax warm? dost thou faint with the burden and heat of the day? Yet a little longer; the arm of the Lord is mighty to save those who trust in him. Truth and right must prevail. The bondsman shall go free. Look to the future! Hark! the shout of joy gushes from the heart of earth’s freed millions! It rushes upward. The angels on heaven’s outward battlements catch the sound on their golden lyres, and send it thrilling through the echoing arches of the upper world. How sweet, how majestic, from those starry isles float those deep inspiring sounds over the ocean of space! Softened and mellowed they reach earth, filing the soul with harmony, and breathing of God–of love–and of universal freedom.