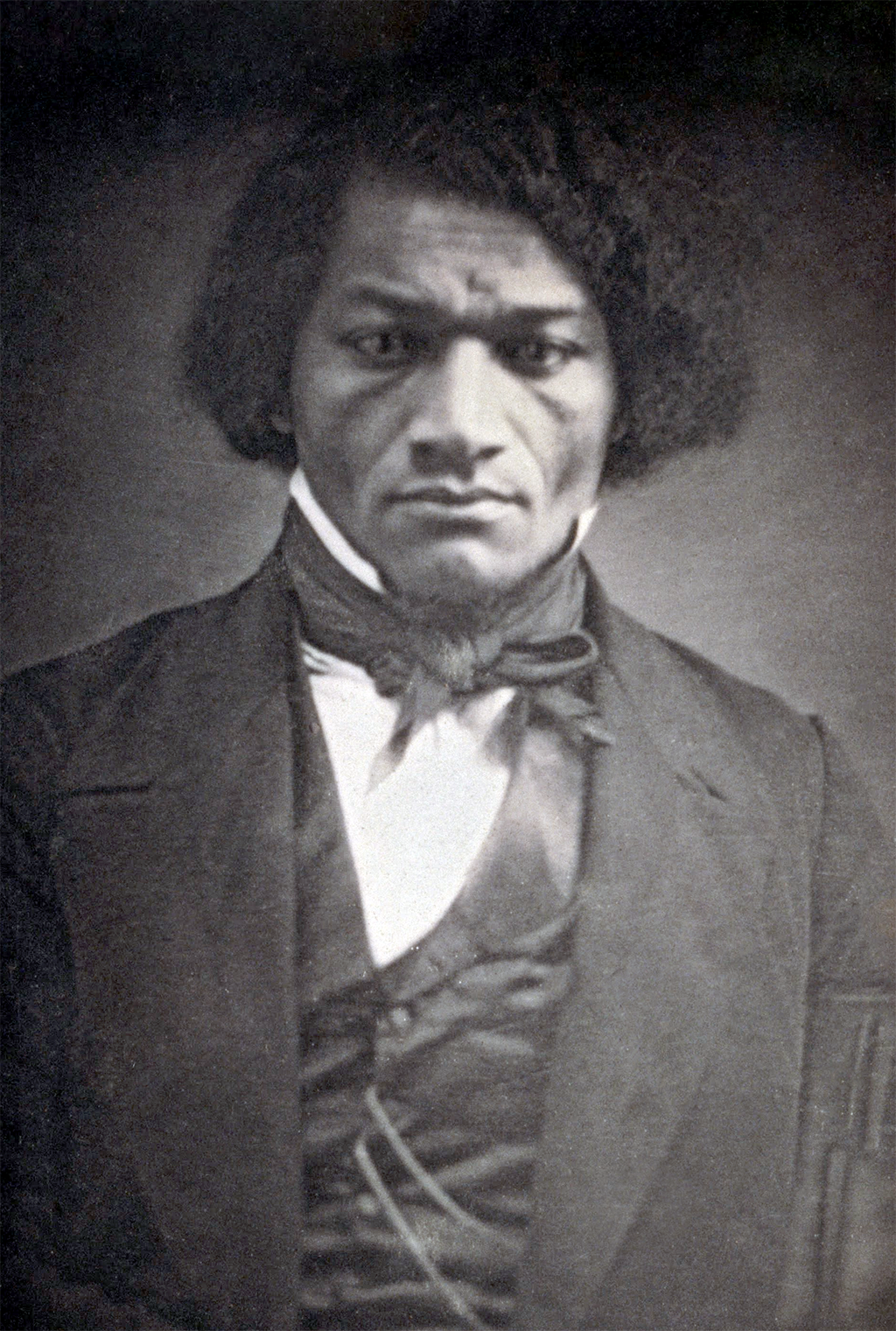 Frederick Douglass described his early life in an address titled, “My Slave Experience in Maryland, “in a speech delivered in New York City on May 6, 1845. The speech, which was reprinted in the National Antislavery Standard on May 22, 1845, appears below. Douglass had just completed his first autobiography called The Narrative of Frederick Douglass one week earlier. It is believe that this is the first time in public he divulged specific facts about his life as an enslaved person. Douglass was introduced to the audience by William Lloyd Garrison.

Frederick Douglas[s] was next introduced to the audience, Mr. Garrison observing that he was one who, by the laws of the South, had been a chattel but who was now, by his own intrepid spirit and the laws of God, a man. He proceeded: I do not know that I can say anything to the point. My habits and early life have done much to unfit me for public speaking, and I fear that your patience has already been wearied by the lengthened remarks of other speakers, more eloquent than I can possibly be, and better prepared to command the attention of the audience. And I can scarcely hope to get your attention even for a longer period than fifteen minutes.

Before coming to this meeting, I had a sort of desire I don’t know but it was vanity to stand before a New York audience in the Tabernacle. But when I came in this morning, and looked at those massive pillars, and saw the vast throng which had assembled, I got a little frightened, and was afraid that I could not speak; but now that the audience is not so large and I have recovered from my fright, I will venture to say a word on Slavery.

I ran away from the South seven years ago passing through this city in no little hurry, I assure you and lived about three years in New Bedford, Massachusetts, before I became publicly known to the anti slavery people. Since then I have been engaged for three years in telling the people what I know of it. I have come to this meeting to throw in my mite, and since no fugitive slave has preceded me, I am encouraged to say a word about the sunny South. I thought, when the eloquent female who addressed this audience a while ago, was speaking of the horrors of Slavery, that many an honest man would doubt the truth of the picture which she drew; and I can unite with the gentleman from Kentucky in saying, that she came far short of describing them.

I can tell you what I have seen with my own eyes, felt on my own person, and know to have occurred in my own neighborhood. I am not from any of those States where the slaves are said to be in their most degraded condition; but from Maryland, where Slavery is said to exist in its mildest form; yet I can stand here and relate atrocities which would make your blood to boil at the statement of them. I lived on the plantation of Col. Lloyd, on the eastern shore of Maryland, and belonged to that gentleman’s clerk. He owned, probably, not less than a thousand slaves.

I mention the name of this man, and also of the persons who perpetrated the deeds which I am about to relate, running the risk of being hurled back into interminable bondage for I am yet a slave; yet for the sake of the cause for the sake of humanity, I will mention the names, and glory in running the risk. I have the gratification to know that if I fall by the utterance of truth in this matter, that if I shall be hurled back into bondage to gratify the slaveholder to be killed by inches that every drop of blood which I shall shed, every groan which I shall utter, every pain which shall rack my frame, every sob in which I shall indulge, shall be the instrument, under God, of tearing down the bloody pillar of Slavery, and of hastening the day of deliverance for three millions of my brethren in bondage.

I therefore tell the names of these bloody men, not because they are worse than other men would have been in their circumstances. No, they are bloody from necessity. Slavery makes it necessary for the slaveholder to commit all conceivable outrages upon the miserable slave. It is impossible to hold the slaves in bondage without this.

We had on the plantation an overseer, by the name of Austin Gore, a man who was highly respected as an overseer proud, ambitious, cruel, artful, obdurate. Nearly every slave stood in the utmost dread and horror of that man. His eye flashed confusion amongst them. He never spoke but to command, nor commanded but to be obeyed. He was lavish with the whip, sparing with his word. I have seen that man tie up men by the two hands, and for two hours, at intervals, ply the lash. I have seen women stretched up on the limbs of trees, and their bare backs made bloody with the lash. One slave refused to be whipped by him I need not tell you that he was a man, though black his features, degraded his condition. He had committed some trifling offence for they whip for trifling offences the slave refused to be whipped, and ran he did not stand to and fight his master as I did once, and might do again though I hope I shall not have occasion to do so he ran and stood in a creek, and refused to come out. At length his master told him he would shoot him if he did not come out. Three calls were to be given him. The first, second, and third, were given, at each of which the slave stood his ground. Gore, equally determined and firm, raised his musket, and in an instant poor Derby was no more. He sank beneath the waves, and naught but the crimsoned waters marked the spot. Then a general outcry might be heard amongst us. Mr. Lloyd asked Gore why he had resorted to such a cruel measure. He replied, coolly, that he had done it from necessity; that the slave was setting a dangerous example, and that if he was permitted to be corrected and yet save his life, that the slaves would effectually rise and be freemen, and their masters be slaves. His defence was satisfactory. He remained on the plantation, and his fame went abroad. He still lives in St. Michaels, Talbot county, Maryland, and is now, I presume, as much respected, as though his guilty soul had never been stained with his brother’s blood.

I might go on and mention other facts if time would permit. My own wife had a dear cousin who was terribly mangled in her sleep, while nursing the child of a Mrs. Hicks. Finding the girl asleep, Mrs. Hicks beat her to death with a billet of wood, and the woman has never been brought to justice. It is not a crime to kill a negro in Talbot county, Maryland, farther than it is a deprivation of a man’s property. I used to know of one who boasted that he had killed two slaves, and with an oath would say, “I’m the only benefactor in the country.”

Now, my friends, pardon me for having detained you so long; but let me tell you with regard to the feelings of the slave. The people at the North say “Why don’t you rise? If we were thus treated we would rise and throw off the yoke. We would wade knee deep in blood before we would endure the bondage.” You’d rise up! Who are these that are asking for manhood in the slave, and who say that he has it not, because he does not rise? The very men who are ready by the Constitution to bring the strength of the nation to put us down! You, the people of New York, the people of Massachusetts, of New England, of the whole Northern States, have sworn under God that we shall be slaves or die! And shall we three millions be taunted with a want of the love of freedom, by the very men who stand upon us and say, submit, or be crushed?

We don’t ask you to engage in any physical warfare against the slaveholder. We only ask that in Massachusetts, and the several non slaveholding States which maintain a union with the slaveholder who stand with your heavy heels on the quivering heart strings of the slave, that you will stand off. Leave us to take care of our masters. But here you come up to our masters and tell them that they ought to shoot us to take away our wives and little ones to sell our mothers into interminable bondage, and sever the tenderest ties. You say to us, if you dare to carry out the principles of our fathers, we’ll shoot you down. Others may tamely submit; not I. You may put the chains upon me and fetter me, but I am not a slave, for my master who puts the chains upon me, shall stand in as much dread of me as I do of him. I ask you in the name of my three millions of brethren at the South. We know that we are unable to cope with you in numbers; you are numerically stronger, politically stronger, than we are but we ask you if you will rend asunder the heart and [crush] the body of the slave? If so, you must do it at your own expense.

While you continue in the Union, you are as bad as the slaveholder. If you have thus wronged the poor black man, by stripping him of his freedom, how are you going to give evidence of your repentance? Undo what you have done. Do you say that the slave ought not to be free? These hands are they not mine? This body is it not mine? Again, I am your brother, white as you are. I’m your blood kin. You don’t get rid of me so easily. I mean to hold on to you. And in this land of liberty, I’m a slave. The twenty six States that blaze forth on your flag, proclaim a compact to return me to bondage if I run away, and keep me in bondage if I submit. Wherever I go, under the aegis of your liberty, there I’m a slave. If I go to Lexington or Bunker Hill, there I’m a slave, chained in perpetual servitude. I may go to your deepest valley, to your highest mountain, I’m still a slave, and the bloodhound may chase me down.

Now I ask you if you are willing to have your country the hunting ground of the slave. God says thou shalt not oppress: the Constitution says oppress: which will you serve, God or man? The American Anti Slavery Society says God, and I am thankful for it. In the name of my brethren, to you, Mr. President, and the noble band who cluster around you, to you, who are scouted on every hand by priest, people, politician, Church, and State, to you I bring a thankful heart, and in the name of three millions of slaves, I offer you their gratitude for your faithful advocacy in behalf of the slave.