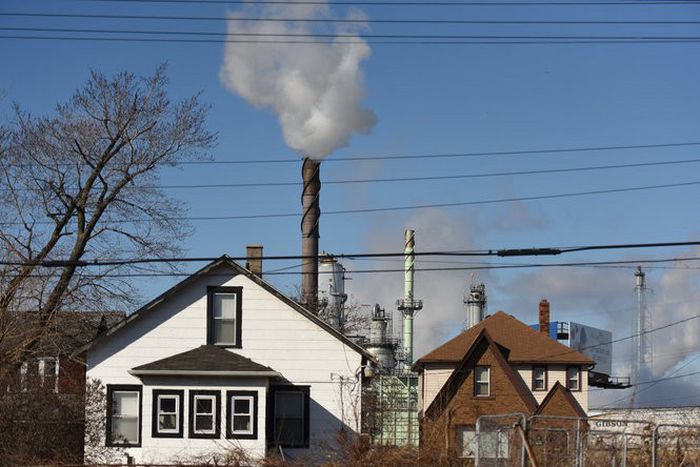 Detroit, Michigan, is a large midwestern city founded in 1701 by French settlers. With a population of 664,139, Detroit is the most populated city in Michigan, and it has the highest percentage of African Americans in a major city with over 70% of its residents being Black. Nicknamed the Motor City, Detroit was long the capital of the nation’s auto industry. On June 16, 1903, Henry Ford opened Ford Motor Company’s first assembly factory in Detroit. Ford created the model for the industrial assembly line including the use of conveyor belts and factory workers for mass manufacturing purposes. Many other automobile companies followed suit, locating or relocating in Detroit. The rise of the auto industry transformed the economy and landscape of Detroit, and it continues to be a top employer to this day. Despite being a significant part of Detroit’s economic prowess, the environmental damage plants and factories have cost the city is immeasurable. These facilities produce waste and contribute to legacy pollution meaning the pollutants they discharge into the atmosphere plague the environment long after the plant shuts down.

Many policies designed to address pollution have missed the mark in establishing sufficient safety standards that protect the people and environment. The 1970 amendments to the Clean Air Act contained lax emission caps that neglected to enforce harsh limits. Oil refineries, coal plants, and other facilities in and around Detroit circumvent laws to continue emitting dangerous air pollutants such as carbon dioxide, sulfur dioxide, and nitrogen dioxide. One oil refinery emitted 430 tons of nitrous oxide and 211 tons of sulfur dioxide in 2014 alone. 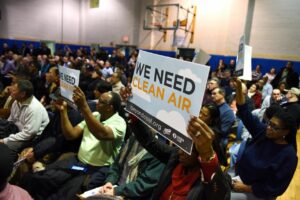 Due to pollution, Detroit residents endure otherwise preventable illnesses such as respiratory and cardiovascular diseases. The city has one of the highest childhood asthma rates in the nation due to toxic air pollution. Black children in Detroit have on average 2,402 asthma attacks per year and lose 1,751 school days. The harmful health effects are not limited to children. The 48217 ZIP code which is mostly located in Detroit and southeast Michigan has been named “Michigan’s Most Polluted Area.” Over 80% of the zip conde’s population is Black and about 44% fall below the federal poverty line. Many social and environmental burdens are present in the area due in part to the 13 active plants.

In 2019, the City of Detroit passed an ordinance committing to reduce greenhouse gas emissions. The city is working towards switching from coal-powered plants for renewable energy sources to cut emissions by 30 percent by 2025. Net-zero emissions by 2050 is Detroit’s ultimate climate goal.