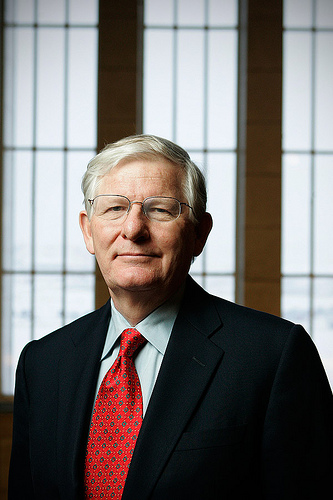 James A. Thurber is University Distinguished Professor of Government Emeritus and Founder (1979) and Former Director (1979-2016) of the Center for Congressional and Presidential Studies (american.edu/spa/ccps) at American University (AU), Washington, D.C.  He is also and Affiliate Distinguished Professor of Public Administration and Policy at AU. Thurber is author or editor of over twenty books and more than 90 articles and chapters on Congress, the U.S. presidency, interest groups and lobbying, and campaigns and elections. His four most recent books are: Rivals for Power: Presidential-Congressional Relations (2022, 7th Ed.) . Campaigns and Elections, American Style (with Candice J. Nelson and David Dulio, 6th Ed., 2022), Congress and Diaspora Politics: The Influence of Ethnic and Foreign Lobbying (with Colton C. Campbell and David A. Dulio, 2018), and American Gridlock: The Sources, Character and Impact of Political Polarization (with Antoine Yoshinaka, 2015). His other books include:  Obama in Office (2011), Congress and the Internet (with Colton Campbell, 2002), The Battle for Congress: Consultants, Candidates, and Voters (2001), Crowded Airwaves: Campaign Advertising in Elections (with Nelson and David A. Dulio, 2000), Campaign Warriors: Political Consultants in Elections (2000), Remaking Congress: The Politics of Congressional Stability and Change (1995), Divided Democracy: Cooperation and Conflict Between Presidents and Congress (1991), and Setting Course: A Congressional Management Guide (with Chaleff, Loomis, Light, and Serota, first three editions 1988, 1990, and 1992). He is editor emeritus of the journal, Congress and the Presidency.

During his tenure at American, Dr. Thurber served as the principle investigator of a seven-year study of campaign conduct supported by a Pew Charitable Trusts grant and as principle investigator of a four-year study analyzing lobbying and ethics for the Committee for Economic Development and was a member of the American Bar Association’s Task Force on Lobbying Law Reform.  He founded the biannual Campaign Management Institute, the Public Affairs and Advocacy Institute, and annual European Public Affairs and Advocacy Institute in Brussels.  Since 1976, he has worked for several members of the U.S. Congress on congressional committee reorganization, congressional budget process reform, congressional ethics, and lobbying reform. He is a founding Member of the Steering Committee (2022-present) of the Princeton Initiative on Restoring Congressional Power, Princeton University.

Dr. Thurber was honored as the American University’s Outstanding Teacher of the Year in 2021. He was also selected Scholar/Teacher of the Year and received the Walter Beach Pi Sigma Alpha American Political Science Association award for his work combining applied and academic research. He is also a fellow of the National Academy of Public Administration, was an American Political Science Association Congressional Fellow and is currently on its Executive Board.  He was awarded the Senator Mark O. Hatfield Annual Award for Applied Public Policy Research.  He currently serves on the Executive Board of the U.S. Capitol Historical Society. He has lectured at over 100 universities in the U.S. and in 40 countries.