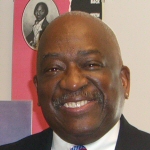 Dr. Samuels is a well published scholar who has written on the 18th century slave narrative of Olaudah Equiano and on several twentieth century African American writers, including Claude McKay, James Baldwin, Toni Morrison, and John Edgar Wideman.  His Encyclopedia of African American Literature (New York: Facts on File, 2007) was published this summer.

A former Ford Foundation Post Doctoral Fellow, Dr. Samuels is the recipient of several awards including the University of Utah’s Distinguished Teaching Award and the College of Humanity’s Ramona Cannon Award for Teaching Excellence.